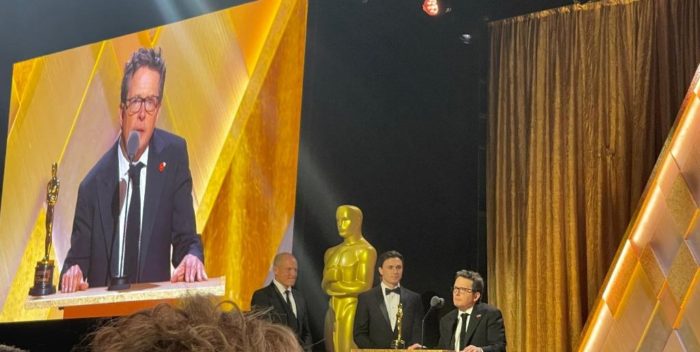 The Oscars’ Lifetime Achievement Awards, aka the Governor’s Awards, are going on right now in Los Angeles at the Fairmont Century City Hotel.

Mindy Kaling is the emcee and there are dozens of A listers and stars on the scene. Everyone who’s campaigning for an Oscar this season is there, from Cate Blanchett to Michelle Williams, Jessica Chastain, Eddie Redmayne, Brendan Fraser, Banshees Colin Farrell and Brendan Gleeson, and so on.

Greta Gerwig is there, star of her husband Noah Baumbach’s “White Noise,” and from the looks of things pregnant with their second child.

Michael J. Fox is receiving the Jean Hersholt Humanitarian Award from Woody Harrelson. His “Back to the Future” co-star Christopher Lloyd is one of his guests. Fox and wife Tracy Pollan ran into another of tonight’s honorees, Diane Warren, the first songwriter ever to win such an award. Warren is receiving her honor from a surprise guest who I can tell you about as soon as it’s all happened.

Another honoree is Peter Weir, the director, who will get his award from Jeff Bridges. Not in the audience is the actor whose career was made by Weir, Mel Gibson. He’s nowhere to be seen and it’s no surprise.

Also on the scene are Olivia Wilde and Florence Pugh, not together, of course. Yesterday it was announced that Wilde and Harry Styles have broken up after all them warred over “Don’t Worry Darling.” a movie that died an ignominious death. Pugh was the star of it, and was in a huge feud with Wilder over Styles. I can’t imagine they sat at the same table.