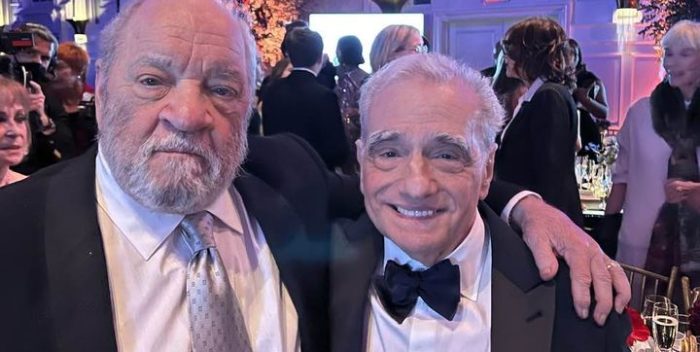 The guest list — you can imagine. Writer/director Paul Schrader, who’s made many films with Marty including “Raging Bull” and “Taxi Driver” — posted a picture. If you had to guess who else was there– Spielberg, De Niro, Keitel, Beinco del Toro, hundreds more stars. Van Morrison performed songs from all of Scorsese’s movies since the beginning. Margot Robbie got down there after their Q&A. No press allowed, so if you know anything, email us at showbiz411@gmail.com

I’m told the COVID protocol was very strict, with people who showed up unaware sidelined until they were cleared. So how did Van Morrison, who’s anti vax and COVID rules, make the cut? Guess they kept him away from everyone else. I’m told Morrison was introduced by The Band’s Robbie Robertson.

On Sunday, Scorsese interviews George Harrison‘s widow, Olivia, on stage at the 92nd St Y. He made a terrific doc about George with Olivia a few years ago. Scorsese is our Orson Welles, only more successful. From “Taxi Driver” through “The Irishman,” he’s made classic film after classic film. His “New York New York” is being turned into a Broadway musical for next spring. He’s working on a new film now with DiCaprio and De Niro. He’s a New York landmark!