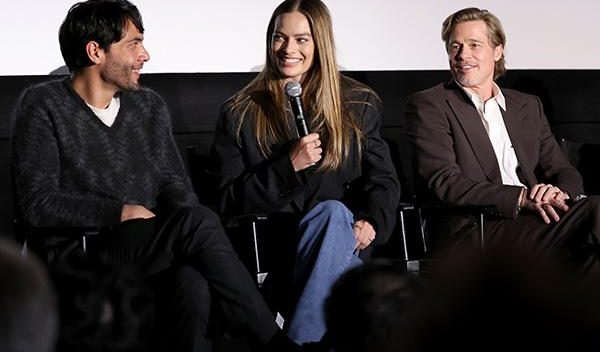 “Babylon” is here. It’s really Hollywood Babylon, sort of referencing Kenneth Anger’s famous book about Tinseltown before talkies made everyone so serious. It was a time of bacchanalias, sort of “The Great Gatsby” on the west coast.

No reviews yet– the movie doesn’t open until December 23rd. But director Damien Chazelle — he of “Whiplash,” “La La Land,” and “First Man” — brought his all star cast to New York yesterday for two screenings and two Q&As after showing it to the folks in actual Hollywood a couple of days ago.

Present at AMC Lincoln Square were members of the Producers Guild as well as some notable actors like the great Cherry Jones and Barbara Barrie. The latter is a youthful 91 years old and a sprite. She came to the screening on her own because no one in her family was around to accompany her!

On stage the cast was charming and happy to be with each other. That included Margot Robbie, Brad Pitt, Jean Smart, Jovan Adepo, Li Jun Li, and Diego Calva, who makes an impressive debut as Chazelle’s Nick Carraway. Pitt was especially fun, nearly falling when his chair on stage actually collapsed, then doing pratfalls, and finally tossing his microphone out when it didn’t work and getting lots of laughs. Pitt announced on stage that he was waiting to make the next Damian Chazelle movie, so that’s a good sign.

“Babylon” clocks in at a little over three hours and it is never boring. Any attempts to nod out are challenged by a fascinating film. So hold on!