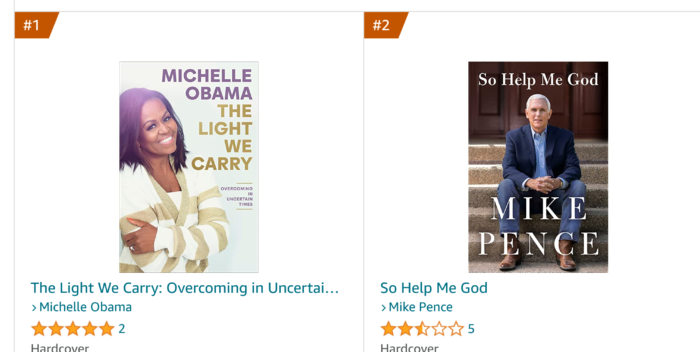 Good has triumphed over evil, I am happy to report.

Michelle’s book is called “The Light We Carry.”

Pence’s book is called “I Won’t Criticize Trump Even Though He Tried to Have Me Killed.” Both books were released today. Pence was all over ABC News with David Muir last night pretending to say something but in reality saying nothing.

Pence wants to run for president, so he’s trying to distance himself from Trump while at the same time run scared. He tapped his foot wildly during Muir’s interview, and clasped his hands. He wants to leave everything up to Jesus. Forget it.

Michelle Obama — I loved her first book, I’d be happy to read this one. I’m very glad it’s number 1.