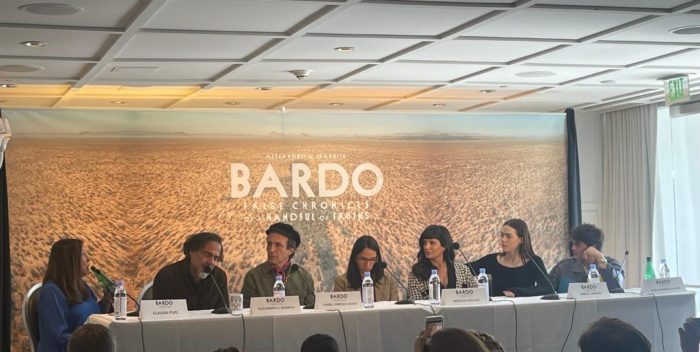 “BARDO, False Chronicle Of A Handful Of Truths,” had its LA premiere recently at AFI.  Five time academy award winner auteur Alejandro Gonzalez Inarritu, who directed and co-wrote the film, explained the origins of his ambitious artful, semi-autobiographical labor of love.

“This film comes from a very deep introspection that speaks about my personal and intimate memories but at the same time collective memory from the country that I belong.  Millions of immigrants dream to be in this country and to share in the opportunities here. At the same time there is no way to get out of the things that you’ve lost when you leave; your affection for the country you left, your friends and family, your roots.”

Alejandro continued his unique articulation the next day at a press conference for the Critics Choice Association. He talked about his feelings about being a ‘citizen’ of both countries. “I have surrendered and allow myself to live in this space of becoming.  I’m not attached to anything.  I’m from nowhere in a good way and that allows me to be in permanent transformation to become a better human being.  My nation is my family.  I think that’s the most beautiful thing.”

“BARDO” is a beautifully  affecting film which looks through a cinematic kaleidoscope of surreal and grounded storylines of the life of Mexican journalist and documentary filmmaker Silverio Gama, played wonderfully by Daniel Gimenez Cacho.  Gama is about to be honored with a prestigious award which brings up complex feelings and regret as he made the decision earlier to move his family from Mexico to live in Santa Monica.   Inatrritu’s musings on his own guilt, the complicated country that is Mexico, what he left behind and his own work and family guilt is truly affecting.  Visually stunning, along with literal dreamlike, production, and a terrific cast, “BARDO” is at two hours and thirty nine minutes, entrancing and self-indulgent in the most charming and expansive way.