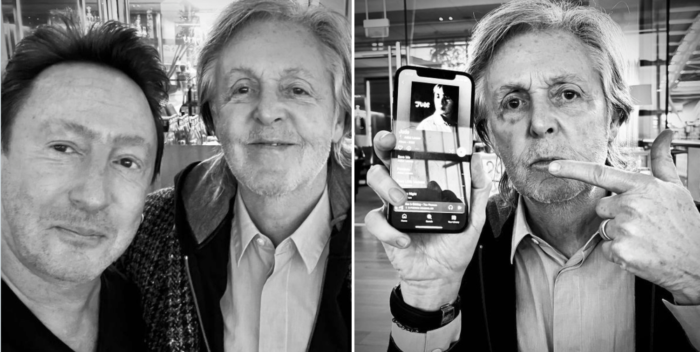 Julian ran into Paul McCartney in an airport lounge. Look at their faces. They are beaming.

You know, Julian has an album out right now called “Jude,” in which he returns to form. He had a bunch of hits in the 80s.

When Julian was a wee lad, McCartney drove up to see him and his mother Cynthia after John left with Yoko. When he returned home, Paul wrote a song called “Hey Jules” that became “Hey Jude.” And now, this. Just lovely.

PS The first person to respond on Insta was Sean Ono Lennon, Julian’s younger brother, with three heart emojis. That was followed by Mary McCartney, Paul’s daughter: “makes me happy x” Also we learn that Paul carries a folding phone, probably a Samsung, not an iPhone. Now, I want one!

Also PPS: Who do ya think arranged that meeting? Someone is playing Mind Games in heaven!