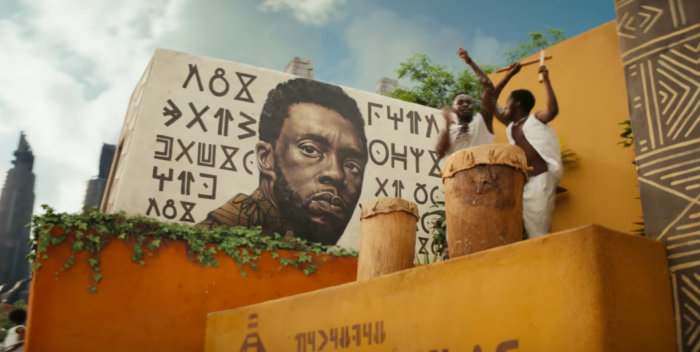 Let’s face it, “Black Panther” was a cultural phenomenon. It made over $700 million in the US, and Chadwick Boseman was nominated for an Oscar. It was a significant film.

If Boseman had lived, who knows what a sequel would have been like? He really projected heroism and nobility. He was the center of “Black Panther,” you couldn’t take your eyes off of him.

Unfortunately, “Wakanda Forever” is a movie with a hole at its center. Boseman’s T’Challa is gone, and the movie doesn’t know how to get around that problem. T’Challa didn’t have a brother or son to replace or succeed him. The original film was already heavily stacked with powerful females, and they are all back. But without Boseman, there’s no movie star, no leader.

Disney has pumped up the Marvel fan base like crazy. But I think they, like the regular audience I saw “WF” with this afternoon, will be disappointed. The opening act is all about losing and mourning T’Challa, which director Ryan Coogler milks for everything he’s got. They’ve even turned the opening Marvel logo sequence into its own memorial momtage. And then there’s the majestic funeral. The only thing they’re missing is lox and bagels at the shivah.

Then, however, you have to have a movie — and they don’t. The world is mad at Wakanda for not sharing its vibranium, the magic material in the water under the powerful island country. Even the UN is mad the Wakandans won’t share it with them. (There’s a UN in the Marvel universe? For what purpose?) Eventually enemies arrive to try and dig the stuff up. Tenoch Huerta plays Namor, the leader of the pack, dressed as a gladiator from a 1950s epic. He is no Thanos (Josh Brolin) the really upsetting villain from the Avengers movies. Forget the hype. Namor is silly. There’s never a suggestion he’s going to win.

You could call this movie “The Woman King,” but that title obviously is unavailable. But with T’Challa gone, he’s briefly succeeded by his mother, the always sensational Angela Bassett. Bassett is a STAR. Unfortunately, her Queen Ramonda exits the movie at the halfway point. Letitia Wright’s Shuri becomes the Black Panther, but does not fill the void. The two remaining women — Lupita Nyong’o and Danai Gurira — are top notch but they also are written as supporting players. (Also, once Ramonda has left, Shuri doesn’t seem to miss her much.)

Well, nature abhors a vacuum. And that’s what the second act is, even with cameo appearances by Julia Louis Dreyfus and Martin Freeman as rogue CIA agents. Winston Duke as M’Baku flits in and out but isn’t much of a presence. So when this two hour forty one minute extravaganza rolls to a somber ending, the audience just sits there hoping for something to chew on. Eventually they get it: a post credits Marvel when the gorgeous Nakia (the very underused Nyong’o) reveals she had a child with T’Challa who she’s been hiding in Haiti. He will be the Black Panther of the third and final movie. Yes, the audience applauded.

Except a huge first weekend at the box office. But what comes next, I can’t say. Other than a cameo from Michael B. Jordan as Eric Killmonger, the deceased villain of “Black Panther,” there’s not a lot of big moments here. There’s also almost no mention of T’Challa’s Marvel buddies except for a passing reference to the Hulk. This just adds to the feeling of being lost. But this happens with middle movies of trilogies. In two or three years the big finale should be more upbeat.

PS This movie is not going to be a Best Picture nominee. The special-ness of “Black Panther” is just not here.