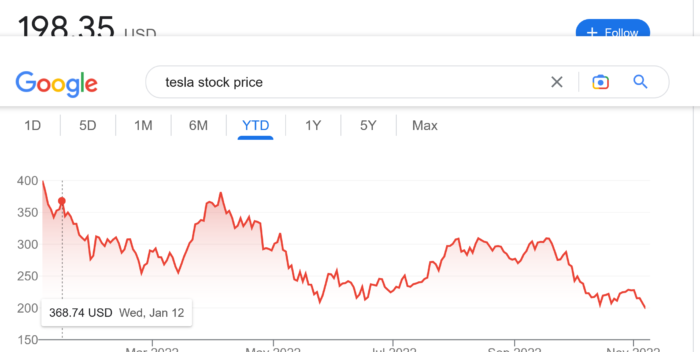 UPDATE: Musk has now posted to Twitter that everyone should vote for a Republican senate. This from a man whose stock price is now worth half its value. I would do the opposite, thanks.

This morning the price is $198 and dropping as we speak.

Is it a coincidence that Tesla’s owner, Elon Musk, has been in chaos now for well over a week after buying Twitter?

All weekend, Musk has been Tweeting like crazy while firing 3,700 employees. He cemented his purchase of Twitter last week for $44 billion and ever since there’s been no end to disruption. Celebrities have denounced him and left the platform. Musk kicked out comedian Kathy Griffin after she wrote a parody post of his own account. Not an hour goes by when he’s not fighting with someone on the site or mocking them.

Look, you paid $44 billion. You can do what you want. I’m not a Harvard MBA grad, but is this the way to run a company?

Forget the use of hate speech, the restoration of accounts belonging to unpopular people with grotesque views. What about the money that got you here? Isn’t this all about the Tesla now?

It might be a good idea for Musk to stop Tweeting for a few days and concentrate on the popularity of his electric car.

Stick around for updates.