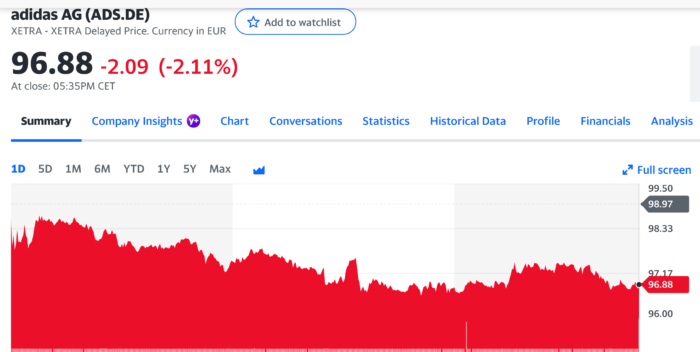 WEDNESDAY NIGHT: Adidas is all laced up with no place to go.

The German sportwear company’s stock price went off the deep end around October 20th, dropping from around $115 to $103. By the time the company offoaded their deal with Kanye West over his antisemitic declarations, they’d reached $96.

Of course, Adidas finally divorced West because the stock was dropping like cement filled sneakers. They thought it would bounce back once they cut ties with the rapper. But guess what? It hasn’t.

Today, Adidas closed on the German stock market at $96.88. Six months ago, Adidas was up near $192 a share. Problems with supply chain and sales in China gradually sent the price down. But the real fall off came with Kanye’s hate filled comments. Critics suddenly started looking up Adidas’s history during World War II, calling it a Nazi company. It took too many days for the execs to separate themselves from Kanye West. And now they’re paying the price.

There’s obviously residual anger over how the company responded– considering that the Gap, Balenciaga, and even soulless Vogue magazine preceded them with quick announcements. It’s going to take longer than anyone thought to win back goodwill. No wonder Skechers kicked Kanye out of their lobby. No footwear company is going into business with West anytime soon.