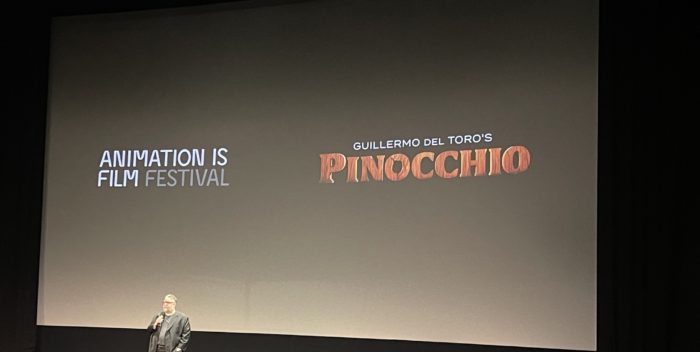 Guillermo del Toro sure has his fans and they showed him their enthusiastic cinematic love at the first LA screening this past week of his stop-motion adaptation of “Pinocchio.” The screening was at the Samuel Goldwyn Theater in Beverly Hills and played to a rapturous, packed house for the final day of the fifth edition of Animation is Film Festival.

After being introduced by Festival director, Matt Kaszanek, del Toro explained his film’s arduous journey.  “What you are about to see we started 15 years ago.  Around 2006 we started to talk about this movie, in 2008 we were full on.  Little by little, we got the thing that you get most in Hollywood, which is no! We got that no again and again.

‘My feeling is that every time you have the opportunity to do a movie, you shouldn’t waste that opportunity by doing something that anyone has tried before. It’s a privilege that you’ll never know if you are going to make another movie.  I never know, I guarantee you that.  The whole team went for this, we never wavered.  This film took this long because we wanted to push the thematical, emotional and performance animation to a place that we hoped that would be helpful in moving the bar.

“Why am I saying this?  Because animation is not a genre for kids.  We know that.  People ask me if this is for kids. I say no, but kids can watch it if their parents talk to them.  It’s not a homogenized, pasteurized yogurt that they can consume immediately.  It’s time to break with the crap that much of animation has been. We tried to rebel against cool and hip.  Nobody in this goddam movie is cool or hip.  We went for humanity, pain, memory and loss. We tried to tackle themes that hurt.  But this movie also has the largest beating and loving heart possible.

“For me this movie is a huge hug to the world.  We need it.  We need love and empathy and to see each other.  In the world there is pain, and when we make stories, we have to account for that pain.  we embarked on this thinking we can deliver something beautiful.  When we animate the ordinary, it will be extraordinary.”

Netflix will release “Pinocchio” in theaters this November before it hits Netflix in December.