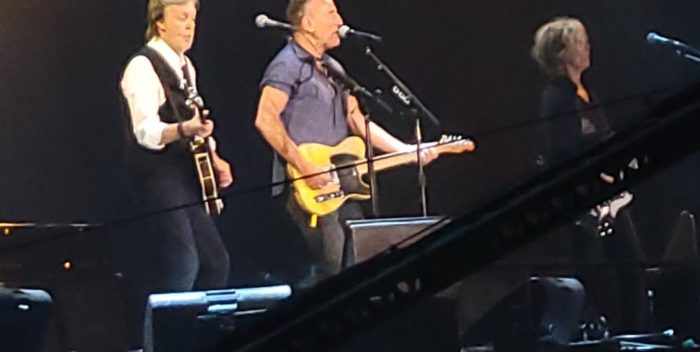 This morning Howard Stern has had an extraordinary interview with Bruce Springsteen, just perfect.

Bruce tells Howard that he’ll never retired “unless I’m incapacitated.” Springsteen says he can his Broadway show “forever,” and that he has enough “different kinds of music” that will allow him to keep going even if not in stadiums.

Springsteen said he was “very lucky” that his songs “Fire,” “Blinded by the Light.” and “Because the Night” were covered by the Pointer Sisters, Manfred Mann, Patti Smith, because “they weren’t going to be hits for me.” He told Stern when David Bowie recorded two of his songs a famous Philly studio, Bruce took the bus from Asbury Park to Philadelphia to hear him do it.

Bruce tells Howard that he was with Clarence Clemons when he died. Clarence was in a coma, and dying from cancer. Bruce played “Land of Hope and Dreams” on his guitar in Clarence’s room. “His brother was there, his nephew Jake and a few other people. It was just a tiny little space…”

During the Stern hour or so, Bruce played several songs live. He called “Tougher than the Rest,” which he performs live usually with wife Patti Scialfa, his best love song. He also cited Clive Davis for prodding him to write “Spirit in the Night” and “Blinded by the Light.” He played parts of “Rosalita” and talked about the real life mother who tried to get a restraining order against him when she was just 15. “And I was the most mild mannered 15 year old ever,” Bruce said. He played “It’s Hard to be a Saint in the City” for Stern, remembering how he auditioned for John Hammond at CBS Records. “I was homeless,” he said, “living in a sleeping bag on my buddy’s floor.”

Springsteen also talks a lot about depression and love. He did a lot of therapy. He called his first divorce “devastating.” He said that he had to do the work to learn how to be loved. “You’ve got to take your ass there, and your mind will follow.” He adds:
Patti and I were both outsiders.”

Bruce is playing an acoustic version of “Born to Run” on his guitar. It’s sensational, of course.

Springsteen is recording a new album at home right now, sounds like another album of covers.

Amazing interview which you can listen to on SiriusXM, even on their app not just in the car!