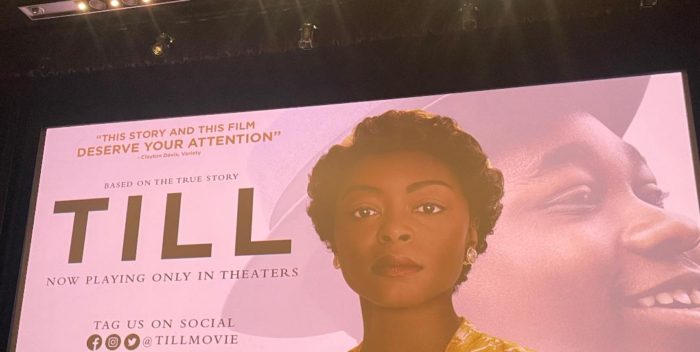 Dame Helen Mirren introduced the film “Till” this past Friday night at CAA. Headquarters. In her most regal way she emoted to the packed crowd that, “I watched the film last night and it obviously it is still with me in the most profound way. “Till” will be with me for the rest of my life.“ “

Till” which is now in theaters, tells the story of the 1955 lynching of 14 year old Emmett Till in Mississippi and the actions of his devoted mother Mamie Till Mobley played by the amazing Danielle Deadwyler. Her bravery and courage literally galvanized the modern civil rights movement.

“Till” is out in theaters now is engrossing, enraging, heart wrenching, added to that an awards worthy masterful performance from Danielle Deadwyler and Mirren is right, it will stay with you. Our friend Pete Hammond moderated the Q & A after the screening. Director and co-writer Chinonye Chukwu explained that “this was an opportunity to center her for her rightful place in history. For without Mamie Till Mobley the world wouldn’t have known who Emmett Till was. Black women are so often erased in general, but especially from history. I felt this was way to correct and/or challenge that.”

The film does not focus on the brutality of the act but rather what Mamie did to avenge her son. (Think of this: we are still talking about Emmett Till today in 2022.) Chukwu went on to say that, “The film I always wanted to make is essentially a character study, about Mamie’s emotional journey and perspective, her origin story of how she became the catalyst for the modern American civil rights movement. I also wanted this film to be a love story between a mother and her child. And not showing the physical violence in this film is a way that I show care for the story for the audiences and for myself.”

Deadwyler said of her journey to the role that, “It was a nerve wrecking thing, a slow process. I read the script in thirds. It takes that kind of reverence and that kind of intentional consideration because it is that significant. Because I have known this event; this horror for the bulk of my life. I considered that in my personal DNA. We wanted to mine the truth of her experience, the public and private nature of this black woman’s life.”

Well Chinonye and Danielle and team most certainly did that and their efforts will surely garner awards kudos. Whoopi Goldberg, also a producer on the film, is terrific as Emmett’s grandmother, as well as Jalyn Hall as Emmett, Frankie Faison as his grandfather and the rest of the cast. Mamie’s activism and defiance along with her vulnerability and strength and her profound grief and love for her son, most definitely makes “Till” powerhouse viewing.