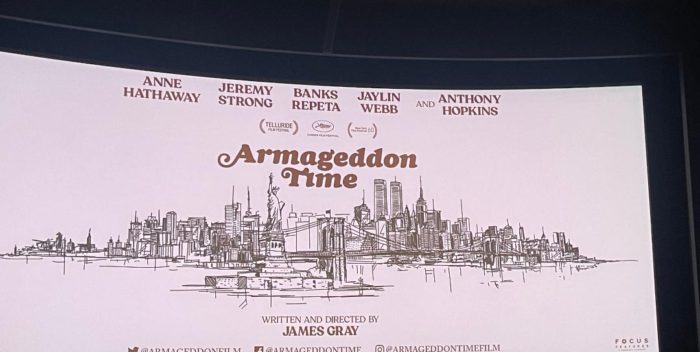 James Gray introduced “Armageddon Time “at the DGA recently by saying “if you hate it throw rotten vegetables, if you like it, clap.”  Gray heard the clapping at the film’s conclusion, he heard it at Cannes and he will continue to hear it enthusiastically through awards season.

“Armageddon Time’ is a poignant, layered and sincere to the core autobiographical story of his growing up in Queens, NY in the 1980’s: imperfect parents, adoring grandparents, at a time when the world seems to be turning upside down.  The rise of Ronald Reagan demoralizes the family, they are terrified of an apocalypse i.e.: an Armageddon.

Paul Graff (Banks Repeta) is a sixth grader in P.S 173.  His always overwhelmed Mom PTA President Esther (Anne Hathaway) and his often angry but trying to the right thing Dad, Irving (Jeremy Strong), is a boiler repairman.  The primary relationship in Paul’s life is that with his grandfather, Aaron, (Anthony Hopkins) who emigrated here from the UK to escape persecution.  His Grandpa sees in Paul the talent and singularity in him that no one else does. Grandpa is the only person that Paul will listen to.  Young Paul thinks in gargantuan ways, he wants to be a famous artist, but he’s struggling in school as he feels it’s beneath him.  He’s a stubborn wise-ass which gets him into constant trouble with the cranky teacher Mr. Turkeltaub (Andrew Polk.)   There he meets his comrade in arms, Johnny (beautifully played by Jaylin Webb) a Black kid from a troubled home.  Johnny is funny, and charming but has too much going against him which he sadly knows will probably define his life, although his dream is working for NASA.

Coddled Paul gets transferred to another school, which his older brother who can’t be bothered with him, attends.  The real life odious Fred Trump (played scarily by John Diehl) was a trustee; his daughter Judge Maryanne Trump (played by an equally scary Jessica Chastain) makes a brief appearance.  Paul dreams up a plan to attain both his and Johnny’s dreams.  The plan goes awry.  The scene where it does is heartbreaking.

The entire cast is pitch perfect.  Hopkins is the gentle heart of the film, luminous in his love for his grandson, importing as much wisdom as he can in the time he has left. Tovah Feldshuh as Grandma Mickey is equally as wonderful. The quirky rambunctiousness of the family is appealing relatable. The film talks about privilege, class, racism and the American dream in a heartbreaking way. There is much joy and comic flare too. Morality and the blurry lines between abuse and love, the small moments in a child’s life, is what makes this film extraordinary in what it says in the quieter moments.   “Armageddon Time” is a provocative, heartfelt coming-of-age story with a top-notch cast.  A sensational film worthy of the slew of awards coming its way.