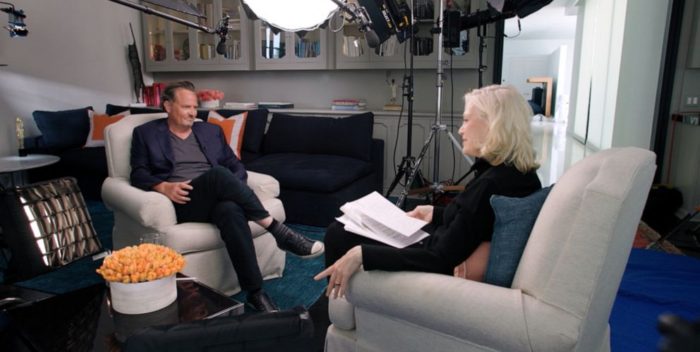 Maybe you’ve just watched Diane Sawyer interview “Friends” star Matthew Perry on ABC. I feel now that it’s over I know less about him than I did before.

Forget about Sawyer’s insincerity. After her Whitney Houston interviews years ago, I always had trouble with her methods.

Now she faces Perry, who says he was living in 55 Vicodin a day. spent $9 million a year on rehab. and now seems like he’s had a stroke. is speech has been affected. He looks terrible. This isn’t a criticism of him. You know he’s struggled but you’re not sure why he’s putting himself through a book tour and this whole routine of making revelations, minor and major, unless to get attention. Why does he need so much attention? Sawyer doesn’t care.

Sawyer wonder why he’s had 25 years of addiction. Did he ever discover any reasons for his illness, or was it simply chemical? There is no explanation, and she’s not going to get one. She’s not interested. She just wants to know how bad it was, that’s it. She looks at him with pitying eyes, the way she looked at Whitney Houston when she said she thought crack was whack. Sawyer never asked Houston what was at the root of her pain.

I thought it was interesting, too, that they never mention his stepfather is Dateline NBC’s Keith Morrison, the guy who narrates those real life murder mysteries. They show an old picture of him, but no name. Is it because he’s on NBC? Very weird.

Maybe Perry’s book explains more. It’s going to be published on Tuesday after an onslaught of gossip items — he made out with Valerie Bertinelli, he dated Julia Roberts, etc. But from Sawyer we’ve learned relatively little. I just hope when all this book publicity is over, Matthew Perry feels better, and continues to.