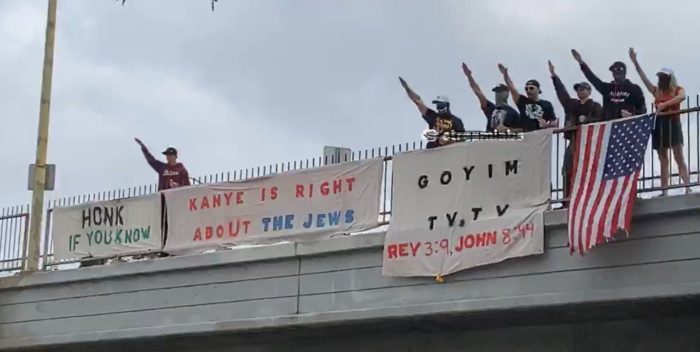 This weekend, hatemongers draped a sheet on an overpass on the 405 Freeway: “Kanye is right,” it read, “about the Jews.”

Fliers appeared in mailboxes and strewn on lawns in Jewish neighborhoods, all anti-Semitic.

All of this has been enabled by Kanye West. The Gap dropped him, so did Balenciaga. Adidas is under pressure to do the same, and they’d better do it quickly. Public sentiment on social media is rising against them.

But the most impact will come if Universal Music Group cuts ties with Kanye West immediately. His records or streams are distributed by UMG’s Def Jam label. In the last week, West’s total sales have dropped to almost zero. The public on to him. But now UMG and Def Jam have to make this move — not a suspension, a cancellation of all their business with Kanye West.

UMG recording artists must take a stand against West continuing with the company. That includes the Beatles — really Paul McCartney — as well as Elton John, Lady Gaga, Taylor Swift, and so on. Just looking the other way will nor work: that’s what happened in Germany in the 1930s. These artists must speak out. They have to take a clear stand that the promotion of anti-Semitism will not be tolerated, or rewarded.

Already nearly 75,000 people have signed a petition on change,org for Adidas to drop West as a business partner. The same kind of petition for Universal Music should be in place soon. Granted, West’s last few albums haven’t sold very well. But what happens when he hands Universal a new album espousing these criminal ideas? Will they just issue it? Or will they take a stand now, so it can’t happen?