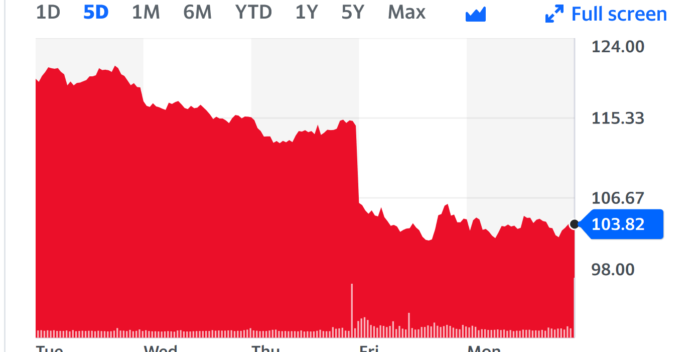 TUESDAY MORNING UPDATE: Adidas has announced its divorce from Kanye West this morning at 7am. Adidas stock price has dropped another 4.2% this morning as of 6:40am to $99.40.

MONDAY NIGHT: Adidas stock has dropped by 10.5% since last Friday.

The reason: the Germany based sports company has refused to sever ties with Kanye West after his escalation of antisemitic remarks and comments over the last couple of weeks. West has stood his ground claiming that no matter what he says, Adidas can’t fire him. His quote:

“I can say anti-Semitic things, and Adidas can’t drop me. Now what?”

Adidas‘s lawyers may agree with that. But the longer they wait to act, and do something about West, their stock is dropping like a rock. On Friday, the stock price was $115. Yesterday it was down to $103. That’s the story. The stock price was already in a steep decline. Six months ago it was up to $188. But the really steep drop came this past Friday.

What Adidas faces now is a huge public relations problem that only get worse. Across social media, the multinational corporation is being ridiculed as as a “Nazi company.” The whole history of Adidas during World II is being explored and dissected by customers who never gave it a second thought. Decades of trying to wipe their slate clean is being destroyed rapidly.