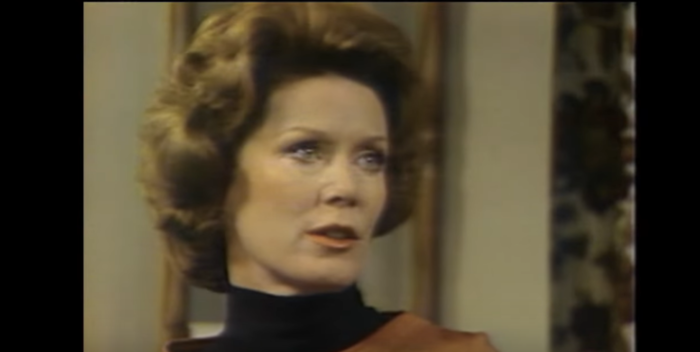 If you watched TV in the afternoons in the 60s, 70s, or even early 80s, Ann Flood, who played Nancy Karr on “The Edge of Night,” was a mainstay even if you flipped through channels. Nancy and her husband Mike (Forest Compton) were the central characters, the good guys in fictional Monticello, while criminals, deviants, and adulterers ran wild.

Ann Flood died October 7th, according to reports. She was married for 61 years to media mogul Herb Granath, at various times Chairman of the Board of ESPN, A&E, The History Channel and Lifetime Television, among other positions. Herb was also a trustee at the Museum of the Moving Image. Back in the day, well after the Karrs had solved their last crime, Ann and Herb were bi annual guests at MMI dinners. It was always fun to see Ann Flood, who seemed to never age, and joke with her about all the craziness on “Edge of Night.”

Among the actors who graduated from “Edge” to nighttime were Lori Loughlin, Holland Taylor, Frances Fisher, and Kate Capshaw. But Ann Flood — with her long neck and cool beauty — who was part of that rare group who held down the daytime mystery series for 22 consecutive years — she probably holds a record of some kind. After “Edge” went off the air, Flood appeared in plenty of other series, still without aging, including “The Cosby Show.”

RIP Nancy Karr, Ann Flood. Thanks for getting me through a lot of homework.