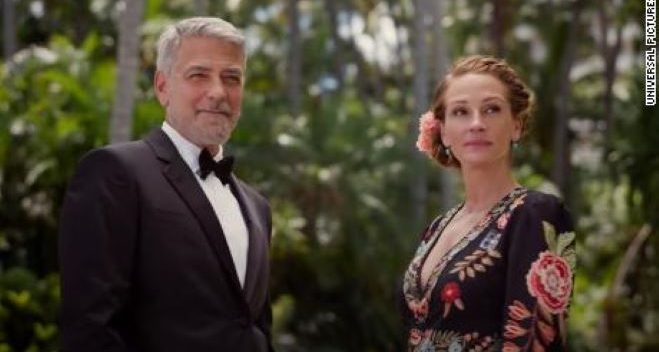 As I’ve already noted, “Ticket to Paradise,” with two big stars, Julia Roberts and George Clooney, has already made $68 million around the world before opening in the US this Friday. This may have been the wisest marketing and sales move of this century.

“Ticket to Paradise” is harmless, fluffy fun. It’s also instantly forgettable except for the travel catalog to the South Pacific, with Australia substituting for Bali. It’s a throwback movie to the 1980s, big studio packages the likes of which we tolerated and are now not nostalgic for.

Here’s the story: Clooney and Roberts were married briefly 25 years ago and produced a daughter who resembles neither of them, played nicely by Kaitlyn Dever. She has a best friend who looks more like she could have been their progeny, played by Billie Lourd aka Carrie Fisher’s real life daughter. Everyone is highly polished, in great shape, looks wonderful. They are very white and well off. The girls have just gone to “college” and are now automatically “lawyers” without going to law school. George and Julia, who loathe each other and cannot be in the same place at the same time, send them to Bali as a graduation gift that must cost around $50,000.

Immediately, Dever’s Lily falls for a local, gets engaged (like, within a week) and announces her impending wedding. George and Julia race across the world to stop the proceedings. No actual reason is given for their displeasure– not the fact that they’ve spent $100,000 on her education and she must start work the following week, not the distance, or any matter of race. They just don’t like the whole thing.

The estranged couple check into what looks like a $5,000 a night resort and bicker with each other until they realize they miss each other, Bali is beautiful, and they have so much money that they never have to call home or go home again. That’s it.

Ol Parker co-wrote and directed this thing. His only major achievement is having written “The Best Exotic Marigold Hotel,” but now you see that director John Madden really made that movie. There isn’t an authentic moment in “Ticket to Paradise,” it’s a totally vacant shell that depends on Clooney and Roberts. They come through winningly. You can see they’re enjoying each other, like Hope and Crosby on the road to Mandalay. They are big stars waiting for a script to be delivered in a beautiful locale. The fact that it never arrives is not their fault.

Some people will love “Ticket to Paradise.” It’s soothing in fact that it reminds us of a time long since gone in American movies. (It could be the sequel to Roberts’ “Eat Pray Love.”) It’s part Hallmark, Lifetime, greeting card. George and Julia could be Robert Wagner and Natalie Wood off to save Gidget from Moondoggie, You get the idea. Nothing wrong with that. “Ticket to Paradise” will have a nice opening weekend, and then find an ancillary life on airplanes and cable. And a lot of people will try going to Bali until they see what it costs.