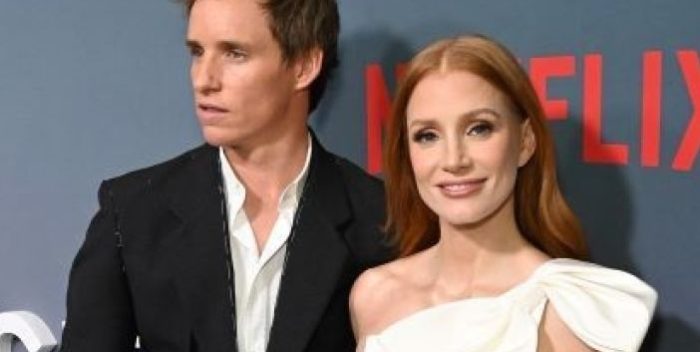 You know, Jessica Chastain won the Oscar last spring for Best Actress in “The Eyes of Tammy Faye.” So much went on that night we kind of forget that part of the show. But Chastain, who is brilliant and beautiful, worked hard for that Oscar.

What does she remember about sitting in the Dolby Theater when Will Smith lost his mind and attacked Chris Rock?

“I wasn’t even paying attention when they called my category,” she told me last night at the premiere for her new, excellent real life thriller, “The Good Nurse.” “To tell you the truth, with all the energy in the room, it distracted me from being nervous.”

Chastain, looking like a million bucks last night as usual, said she’s not one of those people who gets the Oscar and hides it away. “It’s really exciting,” she said. “I have it on a bookshelf where everyone can see it. It’s a big deal!”

It sure is. Jessica told me she didn’t even think it was possible she might win the prestigious award until she won the Screen Actors Guild for Best Actress. “It was only then that I thought it could happen.” The part of Tammy Faye Baker, she says, was one “I couldn’t believe no one had done it. It was such a brilliant role.”

Now Chastain plays real life nurse Amy Loughren who twenty years ago discovered that her best friend at a New Jersey hospital ICU, a male nurse named Charles Cullen, had been busy killing patients unbeknownst to everyone. Eddie Redmayne, who was also at the premiere party at swanky Avra restaurant in Rock Center, gives a chilling awards-worthy performance as Cullen while Chastain’s Amy helps the police uncover his serial killing.

Eddie told me he’s had to warn off his kids from even thinking about seeing the movie, which opens in theaters next week and then goes to Netflix. (See it in a theater, you’ll be on the edge of your seats!) Redmayne says he had to explain in broad terms the kids. “They were very disappointed I was not the Good Nurse!” he laughed.

PS Yes, Jessica and I did discuss her recent, grueling trip to Ukraine which involved flying to Warsaw and then taking a 12 hour train trip to Kyiv. She met with president Zelenskyy in an effort to keep attention on the war, that it is far from from over. Did no one recognize her? “On the way over, no. But coming back” — which involved the reverse train trip (and not the Orient Express, by any means) — “yes. There had been all the press and suddenly a deluge of attention, I realized I had to get out of there.” Would she go back? “Yes, I wanted to immediately. But my friend who I went with says it can’t be done now. Things have gotten that much worse.“