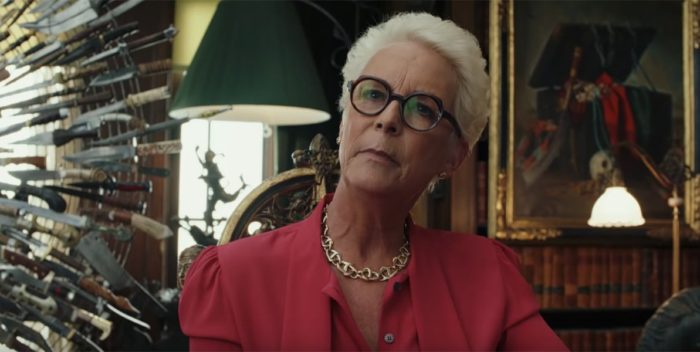 Sometimes I read these press junket interviews with actors and wonder what the heck is going on.

The big headline from “Halloween Ends’ is Jamie Lee Curtis saying that when she made “Knives Out” she says she felt “sad and isolated.” This is to Entertainment Weekly.

Well, in 2019, when the cast was promoting “Knives Out,” Jamie Lee and the whole cast talked about how they all lived in the same house and Jamie cooked meals for everyone night and day.

During the Q&A, everyone discussed the house “Knives Out” was shot in. It’s a real house in Massachusetts, and the cast set up shop there. Craig said, “Even though everyone had mobile homes of their own to retire to, everyone kept coming up to the house and hanging out.”

Shannon added: “Jamie Lee Curtis set up shop there.” Jamie Lee plays Harlan’s eldest child, a hard-edged successful businesswoman in her own right. “She was making soup, and cooking, all the time in the kitchen. It was funny to see her going back and forth from her character to Jamie Lee, the mother hen.”

“I was actually quite isolated,” Curtis told Entertainment Weekly. “I was living in this weird hotel by myself, and a lot of the movie, I’m not in. I was alone for a lot and it was a very tough time.”

So what is it? Was she the Rachael Ray of “Knives Out”? Or sad and lonely? Listen, Constance Wu told me she Tweeted those angry Tweets about the renewal of her TV show because she had a play to do in London and a boyfriend there, and the renewal ruined all that. Now she’s telling an entirely different story.