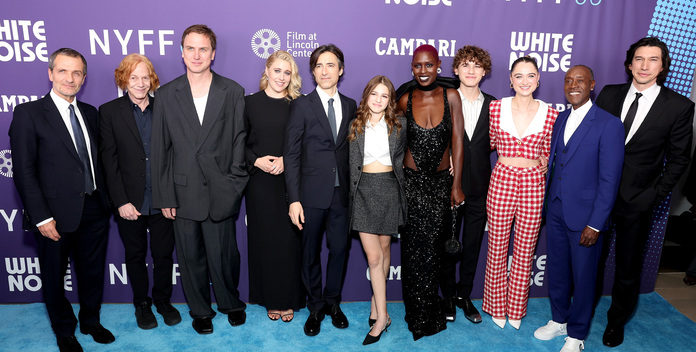 It may not have been the perfect choice to open the Venice Film Festival, where “White Noise” was met with less enthusiasm. But this is a very American movie, and Venice is never the place for that kind of social satire, no matter who the stars are.

In this case, the stars are Adam Driver and Greta Gerwig, who play Jack and Babette, a married Ohio couple each on their fourth marriage. They have a bunch of kids in their blended family. The three older teens are played by Sam and May Nivola, the real life children of actors Alessandro Nivola and Emily Mortimer, and Raffey Cassidy. They are all ready for big careers.

Jack is a professor at the appropriately blandly named College-on-the-Hill. He’s self important and self satisfied having invented a curriculum called Hitler Studies. His rival at the school is Murray Siskind (the excellent Don Cheadle) whose own specialty is teaching the importance of Elvis Presley. This is DeLillo’s “white noise” — that all subjects have the same gravity no matter how mundane or silly, that these professors have convinced themselves that they’re all onto something. On top of that, there’s the absurdity of Jack’s take on Hitler and the Nazis. It’s somehow all about him.

And the shit literally hits the fan. A train collides with a gas truck on the outskirts of town and creates a deadly toxic mass in the sky. The town has to be evacuated. Baumbach riffs a little on Spielberg’s “War of the Worlds” here, one of many movie references throughout the film as the family is now under siege. Adding to the misery is that Babette has been taking a mysterious pill that no pharmacy or doctor can identify, which means she has a secret life that may be worse than the toxic cloud when discovered.

But none of this “can happen here.” Jack is like Mary Hartman (a reference for the older crowd). You almost expect him to say “Let’s go to the IHOP and everything will be ok.” For Jack everything can be rationalized— until it can’t be. Babette, however, is suffering from white noise. Despite being beautiful and having a happy family, she fears her own death. Not her children’s, her own. She seeks answers in a newspaper ad from a charlatan offering home remedies — and the results are, to put it mildly, disastrous.

So there’s a lot going on here as Baumbach covers the entire, sprawling novel including presenting the physical aspect of family in a glowing supermarket that turns out to be the theatrical stage of their lives, and the college where Jack is one of the few who wears what looks like an almost shredded black cloak or a shroud (more death). The attention to art detail is remarkable, from the parade of station wagons bearing students coming around the college’s circular driveway to the rows and rows of gleaming produce around which the customers move in syncopation at the supermarket. Ann Roth’s costumes (including Driver’s fake belly) are characters on their own.

Because it’s a novel, “White Noise” revolves around several central moments, but one that may propel Driver and Cheadle to big things is known unofficially as the Dueling Professors. The two men circle each other with students around them, Driver spouting his Hitler theories, Cheadle recalling the high points of Elvis’s life. The movie kind of levitates here, and also when Gerwig finally explains to Driver what drug she’s been taking and how her life has unraveled secretly in plain sight.

You could call “White Noise” a big meal, a three courser, and then it does come to a natural end. But wait! There’s dessert. After two hours or more of Danny Elfman’s gorgeous score wafting in and out, the credits begin and so does a scene over them, of poetry and ebullience back at the story’s central meeting place, the supermarket, to a new song from James Murphy and LCD Soundsystem. This is the payoff for traveling this journey, and it’s incredibly tasty.

“White Noise” comes to theaters at the end of November, and then moves to Netflix a month later. I hope everyone sees it on a big, big screen. It’s Netflix’s best shot at an Oscar since “The Irishman,” and must be appreciated for its lofty ambitions, most of which are achieved. Baumbach has always worked from his own scripts and personal ideas. This is the first time he’s adapted other material. I have my personal favorites from his long CV including “The Meyerowitz Stories,” “Greenberg,” and a little gem called “Mr. Jealousy.” But “White Noise” is a massive leap forward and suggests huge things to come along the way.

Just one PS: at the after party I ran into Gerry Howard, a DeLillo editor and friend, one of the living legends of book publishing. He knows “White Noise” probably better than anyone aside from the author. (The great Elisabeth Sifton was the original editor of the book.) I hope he doesn’t mind me saying this, but Howard told me he really enjoyed the movie. For a book editor of such high esteem to say that means a lot.