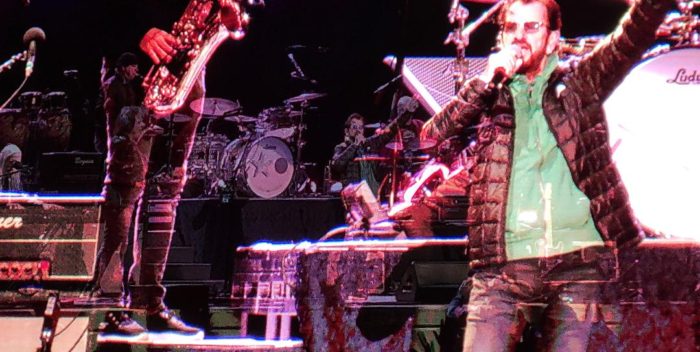 Ringo Starr is 82 and to paraphrase his song, “I’m the Greatest,” he can still boog-a-loo.

I caught up with Ringo and his All Starr Band on tour tonight in Bridgeport, Connecticut, of all places, at the Hartford Healthcare Theater. The always former Beatle and best drummer in rock and roll looks ever youthful thanks to a good diet, meditation, and his love of preaching peace. It’s all good. His only complaint tonight was the unexpected whipping cold wind at the outdoor venue, thanks to Hurricane Fiona. “We’re going to play Alaska next!” he declared in between asking the audience, “Are you cold?”

I’ve seen the All Starr Band in many incarnations over the years but this an especially tight version. If Richard Nader’s oldies shows of the past had been anything like this, we might have thought twice about snickering. Ringo’s got real stars who are also top notch musicians, and no fat: Edgar Winter, Steve Lukather of Toto, Hamish Stuart of Average White Band, Colin Hay of Men at Work, plus two superior studio musicians in drummer Greg Bissonette and horn player/singer Warren Ham.

If there’s a scene stealer in the group it’s 75 year old Edgar Winter who straps a keyboard around his neck and plays it like Little Richard, wails away on the saxophone, straddles an electric guitar. He is literally Most Valuable Player. Winter gets to showcase his talents in his 70s hits “Frankenstein” (the centerpiece of this show) and “Free Ride.” On the former, Bissonnette gets his own spotlight on drums and he’s phenomenal. (He threw into his “Frankenstein” a bit of Ringo’s “Abbey Road” finale, a nice clever nod to our host.)

Everyone else is terrific, as well. Lukather’s guitar solos on his own “Rosanna” and other numbers are magic. Ham is a gifted all around musician with a lovely tenor that comes in handy on some high notes that escape the older guys. Stuart’s Scottish funk still remains authentic and full of groove. Colin Hay delights the crowd with “Down Under” and “Who Can It Be Now.”

And then there’s Ringo. Who doesn’t love him? He shows off his tremendous drum skills on Beatles songs like “I Wanna Be Your Man” and “Boys.” He can lead the crowd in sweetly nostalgic versions of “Yellow Submarine” and “With a Little Help of My Friends,” and rock them with “It Don’t Come Easy” and “Photograph” as if they were new. He’s also as charming and as invested in rock and roll as ever. That comes across. Ringo is rich as he could be. He could just stay home and spend the day wrapped in cashmere. But he’s a musician at heart, he loves the audience, and he’s going to keep doing this until someone says, Honey don’t.

And that will likely never happen.