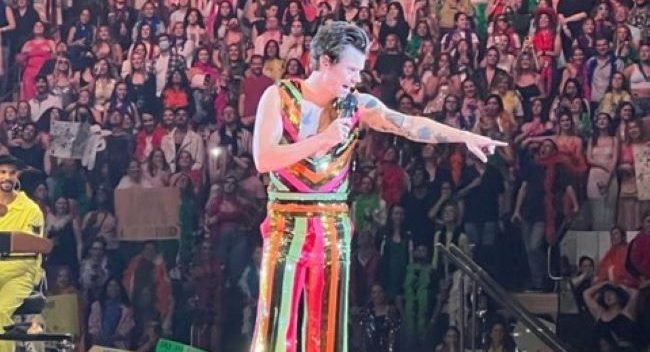 Spotted at the Garden last for his ebullient finale were a bearded Jimmy Fallon, Drew Barrymore, and Gayle King. (There was an unconfirmed Anne Hathaway sighting as well.) King took the stage, as she does, to proclaim Styles’ run a Big Deal near the end of the show, and present a banner that will hang in the Garden to mark the occasion.

The audience, composed largely of teen girls, was wild and loud. They love Harry. To celebrate the final night, different colored boas (made of polyester, now all over my clothes) were placed on each seat. That’s because Harry is famous for wearing boas. And glitter. The crowd was having its own early Halloween as nearly everyone was wearing something sparkly and fabulous.

By contrast, Styles — known for outrageous costumes — was rather tame. He wore a pantsuit that looked like it was made from crime scene tape and wrapping paper from the Party Store. Alternately, he looked like a Men at Work sign with zigzagging juxtaposed colors. But for Harry, it was the equivalent of a business suit compared to past ensembles.

Over the last decade, moving from One Direction to a solo career dotted with smaller movie performances, Styles has become a phenom. You can see why: he’s endlessly cheerful, humble, gregarious. His public persona (which may be close to the private) is of an affable, amiable guy who’s a showman with a solid voice. He’s not a great musician on instruments, but that doesn’t matter. What’s drawing audiences is his innate charisma. It’s authentic. You can’t manufacture it.

The stage is very simple but in the round, or the rectangle, actually, with the standing room only on the floor — packed — and ramps running among the dancing boas on either side. Styles knows how to work this stage capably. Indeed, some of the best parts of the night was him interacting with the audience, reading their signs, and asking them questions. He’s very at ease in this setting, which is kind of amazing since there are 20,000 people around him.

I’ve always had trouble with Styles’ solo hits, they all sound like they’re constructed from pieces of old songs. The first seven or eight songs of the night, with the exception of “Late Night Talking,” all sound the same. But then he delivers a powerful update of One Direction’s “What Makes You Beautiful,” and the show lifts off on its own, not just from the constant, cacophonous screaming. There’s a click in the room, and then his few big solo hits like “Watermelon Sugar,” “Sign of the Times,” and “As it Was” erupt.

The takeaway is that this is a guy who’s going to be around for the long haul. He’s going to make more hit albums and movies. He’s capable of a lot of things. If this were the 60s or 70s he’d be hosting “The Harry Styles Hour” on TV. He’s so comfortable on stage — he looks like he’s bursting to rock and not just pop — he could easily play Mick Jagger in a movie about the early Rolling Stones. He’d be perfect.

Every generation has had its pop superstars, whether it Fabian or Elvis or Ricky Nelson, and more recently Justin Timberlake. Now it’s Harry Styles’ turn, and he wears the crown well.

Come back around noon and I’ll add some pictures and a little video.