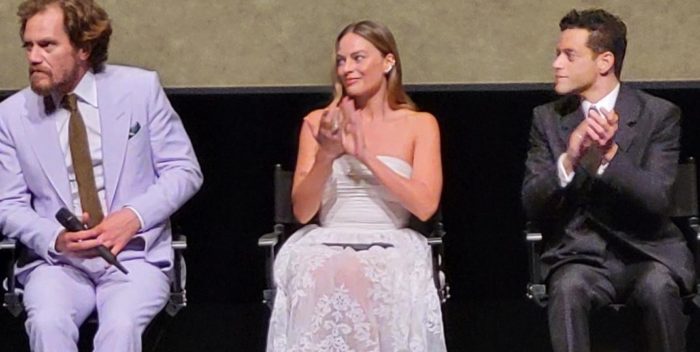 All the action Sunday night was at Lincoln Center’s Alice Tully Hall. David O. Russell’s “Amsterdam” got the red carpet treatment all the way, with an A list invited audience and all the stars of this comedy ensemble on hand.

And Drake, yes the rapper Drake, introduced the movie. He and rapper Future are producers on it, it comes from their company with Matthew Budman. The Marvelous Milchans are involved, too.

It’s been a while since we had a real A list opening in New York. There are still no parties, because of COVID, but the screenings are back.

Ben Stiller showed up to moderate a Q&A with Russell and most of the cast after the show. Stiller starred in Russell’s “Flirting with Disaster” many years ago.

Since I can’t review “Amsterdam” yet — except to say it’s a richly textured comedy with a serious political undertone — I’ll tell you who sat next to me. It was a young man named Vaughn Page, a 33 year old actor now from Los Angeles. He brought his girlfriend, Elizabeth. “Amsterdam” is the first movie he’s ever been in. Russell apparently liked him so much he increased his work schedule from 1 day to eighteen. Vaughn pops up all over the movie starting with the opening scene.

Get this: Page spent six years in the Air Force, where he took some acting classes. He went to a local LA college after that, took a couple more acting classes, and everyone there urged him to start auditioning. His career has taken off like a rocket. He’s picked up small parts in things like HBO’s “Winning Time” and in a new “Star Trek” series. He’s on his way! I introduced him Oscar winning screenwriter Geoffrey Fletcher, who was sitting behind us. “Did you see Precious?” I asked Taylor. He nodded. “Well, this guy wrote it.” The young actor almost fainted. (Vaughn is on the right.)