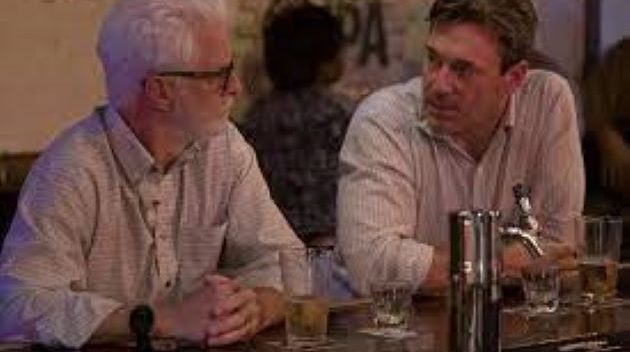 Fletch is back. He used to be played by someone else. But those days are over.

Enter Jon Hamm of “Mad Men” fame who’s taken a circuitous route to post-series stardom. When I met him with his then girlfriend Jennifer Westfeldt, right after “Mad Men” started, I thought he’d be a movie star overnight. “Mad Men” was taking off, and Hamm looked in person like Clark Kent. That was a long time ago but I’m glad I was right.

As amateur sleuth and investigative reporter in this Greg Mottola directed comedy, Hamm comes off like James Garner in “The Rockford Files.” That’s high praise. He’s cool and funny, armed with wisecracks and always ingratiating. He looks rumpled and put together at the same time. No one could have predicted Don Draper would one day go from mysterious to goofy. But Hamm and Mottola could actually turn “Fletch” into a series of movies for theaters and streaming and roll in the dough.

As it is, “Confess, Fletch” hits 500 plus theaters tomorrow and it’s on video on demand. It comes from Miramax and Paramount and I don’t think either of them knew they had a hit or what to do with it. Surprise! “CF” wasn’t even screened really. I had to ask for a review link. Clearly no one thought much of it.

But they were wrong, as evidenced by a very healthy 82% on Rotten Tomatoes. Fletch is in Italy with a beautiful girlfriend (beautiful Lorenza Izzo, an Ana de Armas lookalike) whose father, a Count (Robert Picardo) has been kidnapped. The kidnappers don’t want money, but they do want a long lost Picasso he owns (but can’t find). Fletch thinks the painting is being sold in Boston, so he goes there to retrieve it. There he finds a sketchy art dealer (Kyle Maclachian) and has a “Mad Men” reunion with John Slattery, playing a newspaper editor. Then the Count’s wife shows up in the form of a sexy, witty Marcia Gay Harden who’s got a pretty good Italian accent.

Who did I leave out? Roy Wood Jr. and Ayden Mayeri as a couple of endearing, bumbling cops and Annie Mumolo as a goofy pot head neighbor.

The whole thing was shot in Boston’s Back Bay, my college stomping grounds, which adds a lot of flavor. The screenplay by Mottola and Zev Borow is lively and fun, very glib with just enough “Deadpool” like ad-libs to give Hamm room to fool around. (Harden gets in a few zings, too.)

I know you can find “Confess Fletch” on Amazon Prime, and soon I think it will be on Showtime and/or Paramount Plus. But go see it in a theater. It’s 90 minutes of high quality entertainment without super heroes, explosions (there are fireworks), or any kind metaverse. If you’re an adult, you’ll really like it.