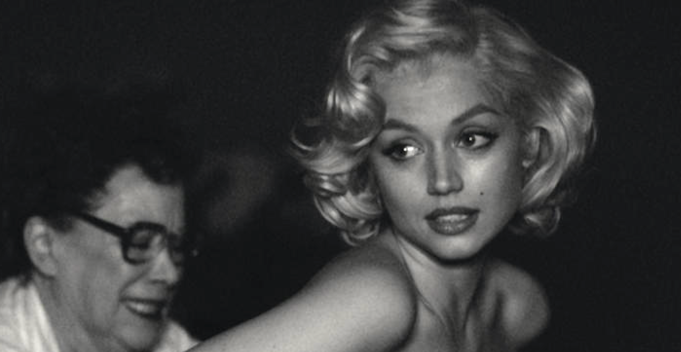 There really should be some kind of warning at the start of Andrew Dominik’s “Blonde” about Marilyn Monroe– “None of this is true.” You would hate to think the casual viewer would find this on Netflix and think most of these events ever happened. They didn’t.

“Blonde” is based on a 700 page novel from 2000 by Joyce Carol Oates in which the writer of many, many novels imagines the story of Monroe, the screen siren who died in 1962 at age 36 from a drug overdose. Born Norma Jean Baker, Monroe had a career that soared like a rocket, crashed and burned with her death and became a Hollywood legend.

The book was turned into a 2001 miniseries for TV, which makes sense since it is very long. There was no need to make this new movie, which runs two hours and 40 minutes and still manages to have big holes that are filled by a lot of artsy fartsy stuff. “Blonde” the movie is a miniseries stuffed into a film. It could easily have been three hour long segments.

The big revelation is that Ana de Armas, who charmed everyone in “Knives Out,” is spectacular as Monroe. Considering that Michelle Williams was so good in the more concise “My Week with Marilyn,” de Armas finds a whole new angle on the Hollywood icon. She holds this unwieldy, often bizarre project together because you just can’t take your eyes off of her.

The movie is rated NC-17 or as we used to say, X, because there’s a lot of nudity and quite a bit of simulated sex that kind of makes you feel bad for Marilyn. I guess Oates’s point is that the public thought of her as the eternal pin up, but in real life she was demeaned for her sexuality by terrible men. One of the few things I liked about “Blonde” is Marilyn often showing her intellectual side to men who just laugh at her. One of de Armas’s best scenes is Marilyn discussing Chekhov with a skeptical Arthur Miller (Adrien Brody, who’s excellent).

But “Blonde” is the kind of movie you need to Google or have a tip sheet handy to see what really happened and what didn’t. Oates just made up a lot of stuff that went into the first movie and is present here, which is too bad. The worst part of this is an imagined gay relationship between Charlie Chaplin, Jr. and Edward G. Robinson, Jr., who were good friends in real life and ladies men. There is no basis in fact for Oates’s story. In “Blonde,” they have three way sex with Monroe and impregnate her. She gets an abortion. And then that abortion — Dominik cuts to a Macy’s balloon style floating fetus a lot — haunts Monroe throughout the film. None of that happened. (If I were Chaplin’s or Robinsons’s descendants, I’d be livid.)

Dominik has also included Oates’s series of letters from Monroe’s long lost father, whom she never meets and never knew. In real life, Monroe’s father was known to her mother and has since been established through DNA. It’s unclear in the movie if Monroe is imagining the letters or if she’s actually receiving mail from him. Either way. it’s a fictional construct and like most everything else in the movie, never happened.

So what about the Kennedys and Peter Lawford? The screenplay is so disjointed that only JFK is seen, and in a very negative light. Bobby Kennedy and Peter Lawford don’t exist, and we have no idea how Marilyn even met the president. (Like a lot of things in this movie, it just happens. For example, we never get to see how Norma Jean — in the movie there’s an e at the end of Jeane — goes from being a tortured little girl to an overnight pin up star. I guess you have to just assume a lot to make it work.)

Real Monroe experts, like my friend Denis Ferrara, are just going to go batshit crazy when they see “Blonde.” But it has does have many fine qualities to offset its length and mishegos. The music by Nick Cave and Walter Ellis is excellent. The cinematography from Chayse Irvin, mixing black and white with fade colors, is arresting. Brody’s Arthur Miller and Bobby Cannavale’s Joe DiMaggio are pungent representations of Monroe’s famous husbands. Julianne Nicholson is frighteningly good as Norma Jeane’s brutal mother.

Oates’s novel may work on that level– a work of fictionalized history is different on the printed page. But after 60 years, you’d think we could get a movie that adhered to some facts. Monroe had friends — like Shelley Winters and Renee Taylor. In the movie she appears to be totally alone, isolated from all connection to normal life. It’s too bad they’re not shown. But “Blonde” is a concoction, Dominik’s self indulgent effort to paint a masterpiece over an already beautiful picture.