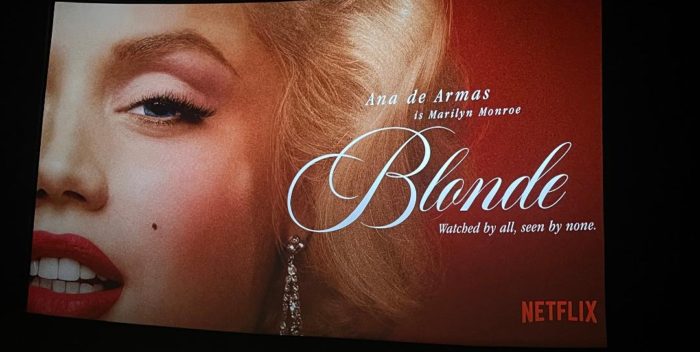 “We’ve been chasing Marilyn’s ghost around Los Angeles. We got close to Marilyn. We shot in the actual apartment she lived in with her mother, we shot in the house she died in. Might be a strange thing to do in a film that is admittedly fictional but to me it’s all fiction. It’s very difficult to step outside of our fears and desires and sink into their own violation. All of us are telling ourselves the story of what’s happening, I’m doing in right now at this very moment, That is perhaps the real subject of this movie.”

Dominik then went on to thank “Netflix for supporting our vision. I want to thank Jeremy and Brad [meaning Pitt, their Plan B productions produced the film.]” He also paid homage to the author, Joyce Carol Oates; her book “Blonde” is which the film is based on. Oates was not there but Dominick remarked ” I spent years inside her head.” He ended with “I hope I make a believer out of you.”

Ana de Armas, who is sensational as Marilyn then told the crowd, that “this screening feels so special. We did the film three years ago. Finally you guys going to see it. This is why it is so beautiful to be here, where Marilyn had been so many times. Hopefully you’ll get to know Norma Jean even more, that you’ll love and respect her even more.”

I spoke with Ana at the after party at Musso & Frank Grill and she told me she but her total trust in Dominick. “I put myself in his hands. It was difficult. I did all the research I could, and tried my absolute best.” Dominick told me that it is indeed a horror film about Marilyn. “It had to be. She was in unbearable fucking pain all her life.” Adrien Brody, who plays Arthur Miller, was there with significant other Georgina Chapman. Bobby Cannavale is a stand out as Joe DiMaggio, he wasn’t able to attend.

The film is NC-17, with nudity and a couple of jaw dropping scenes. De Armas gives a truly brave, powerhouse performance. Dominik’s vision puts together the most known parts of her life in a collage that’s trippy combined with despair. At two hours and 45 minutes, “Blonde” is most definitely ambitious, Dominick goes all in. The photography and production design are tremendous and artful. It’s uncomfortable to watch, but engaging and mesmerizing at the same time. Sure to be divisive, but definitely worth seeing.