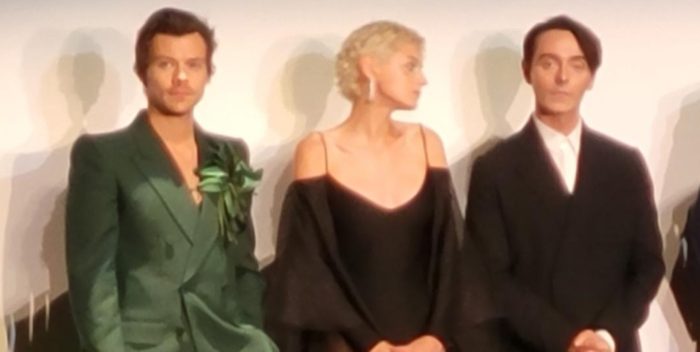 There’s no question that teenage girls are Wild about Harry Styles. They lined the streets around the Princess of Wales Theater in Toronto yesterday to catch a glimpse of the pop star. When I mentioned to a 20 year old volunteer that it was like Beatlemania, he looked at me blankly. What the heck is that?

Inside the POW the audience was enthusiastic but not quite so over the top. Harry got a big ovation during the introductions and then things settled down. At the end of the time, the audience showed its appreciation, but there were no panties thrown on the stage.

Now come the reviews and so far, on Rotten Tomatoes, the movie has scored a 50 from 8 reviews. That’s not a lot of reviews, but it does point to the response in general. I wrote last night that “My Policeman” looks like a Merchant Ivory production of a Harold Pinter play. Three people are caught in a triangle. One of them does something terrible to another, in the process ruining their lives. It’s all very polite, except for the sex between the two men, which may seem surprisingly graphic to the teen age girls. And for straight men, “My Policeman” will not be a destination movie.

Amazon Studios has nevertheless produced a smart looking, reverential film of high quality. For a certain audience beyond Styles fans I’m sure there will be debate and discourse. The acting, of course, is vivid. I really enjoyed Linus Roache and Gina McKee as the older versions of Styles and Emma Corrin (who is a star in this film a la Carey Mulligan). McKee has to sell her character’s simultaneous concern and duplicity, and pulls it off with aplomb. Roache brings a grief to the adult version of the Styles character that you don’t expect.

But what I didn’t understand about all these characters is how they proceeded to live after the events of the film. The story takes place in 1957-58. The two men have an affair. There’s a trial because being homosexual in Britain is a crime. The married couple, Tom and Marion. do not divorce. David Dawson’s Patrick, a museum art curator — goes to jail for two years. And then, they just… went on? I couldn’t figure out how Tom and Marion got through the sexual revolution of the 60s and the freewheeling 70s not having sex, or children, or any connection to each other. Also, how Tom didn’t know what Marion did in 1958. It never occurred to him?

One last PS: Dawson’s Patrick is five foot eight inches, He reminded me of Charlie Chaplin. Yet, 40 years later, played by Rupert Everett, he’s six foot four and substantially larger physically even sitting in a wheelchair. Those intervening years must have been hectic.