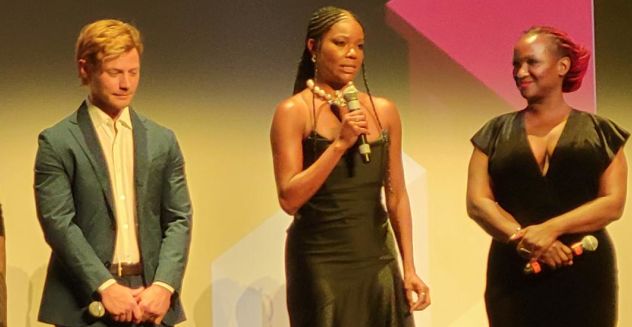 After all the crazy hype from Telluride and Venice, it was starting to feel like a strange film season.

But tonight the Toronto Film Festival opened with two winners, beautifully made, consistent films that may bear fruit for real come awards season.

The first one was “The Swimmers,” based on a real life story of two sisters, Syrian immigrants, who make a hugely harrowing escape to Berlin. They are each trained swimmers, one of them Olympics-level, and quite young (teens). This was going to be released by Focus Features, but moved during the pandemic to Netflix.

Directed by Sally El Hosaini, with incredible cinematography from Christopher Ross, “The Swimmers” is partly in English, and partly in Arabic with subtitles but it is not a “foreign film.” The excellent Working Title Productions made it. I really think this film will play to the same audience that loved “CODA.” The whole saga of the sisters’ journey, plus the rousing competition at the Rio Olympics, should be an enormous crowd pleaser. Plus there’s the unusual casting of two Lebanese sisters, actresses, as the Syrian sisters who now live in Berlin.

“The Swimmers” was followed immediately next door at the gorgeous Royal Alexandra Theater by “The Inspection,” written and directed by a male director named Elegance Bratton. Very much in the mode of “Moonlight.” this feature could turn out to be a sensation. It’s Bratton’s real life story as gay Black man whose mother could not accept him. He was going nowhere, homeless, and then joined the Marines to turn his life around. Jeremy Pope, the hot Tony double Tony nominee from “Ain’t Too Proud” and “Choir Boy,” plays Bratton like a star. Boom! There are many standouts here including veteran actor Bokeem Woodbine who nearly steals the film as the sergeant who runs boot camp.

But the real surprise is Gabrielle Union, a great beauty who until now has been relegated to pleasant if ineffectual comedies. She’s also married to NBA star Dwayne Wade. Stripped of make up, Union makes a splash a la Mo’Nique or Mariah Carey did in “Precious.” This woman has been acting since 1993, and yet this will be called her breakthrough. At the Q&A following the movie I asked her how she came to this moment working in a dramatic film. She replied, “No one asked me before.” They will now!

Both movies were met his normal applause, very enthusiastic, lasting a minute or so.