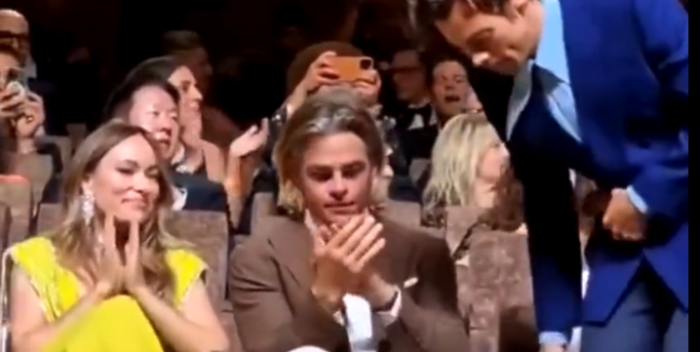 The craziness surrounding “Don’t Worry Darling,” a movie that doesn’t open until September 23rd, is off the track this morning.

The new big scandal is, Did Harry Styles, as he sat down at the Venice premiere, lean over and spit on co-star Chris Pine?

The video is being studied as if it were the Zapruder film, from many angles and in slow motion. Pine, the spit-advocates claim, flinched and then stopped clapping as Styles hocked a good one and then took his seat.

Others claim that Harry just pursed his lips as he sat down, and that Pine had momentarily misplaced his sunglasses, stopped clapping when he found them on his seat and recovered them.

And there’s more: the seating at the premiere is being discussed like it’s the Last Supper. Director Olivia Wilde is kept away from actress Florence Pugh, because they’ve been “feuding” for months. Wilder and Styles, rumored to be having an affair, are also kept apart. Pine “zoned out” at the press conference because he clearly has more interesting things on his mind, like where is socks are (he wore none all day). And then Harry rose from his seat and kissed castmate Nick Kroll on the lips.

But does any of this matter? Is all publicity good publicity? The movie is currently at 46% on Rotten Tomatoes among critics who saw it in Venice. That’s actually bad news because they are all “top critics” and not bloggers who will add to the numbers later, many of whom may be Styles fans. Those Venice reviews are hardcore writers. Even the ones who didn’t like the movie and gave it a “fresh” are harsh on the movie overall, kind to Pugh.

Next up will be the US publicity tour, which won’t include Pugh, who is shooting “Dune Two” in Eastern Europe. Wilde, Kroll, and Pine may hit the trail. Styles is on tour, and also has his other fall movie, “My Policeman,” premiering at the Toronto Film Festival this week. Will anyone actually address all that’s occurred? Or is it best to just be coy, let silence fuel the flames, and hope it translates into big box office?

My spit take? The sunglasses scenario wins over the actual phlegm-ing, first of all. Harry was too busy worrying about his lapels to hock a louie on Captain James Kirk. And the kiss? Planned, by Kroll and Styles, who were “taking the piss,” as they say, making an ironic comment on all the rumors.

But all of that would make too much sense.