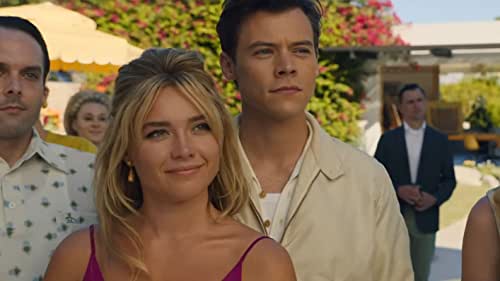 The reviews are coming in from Venice for Olivia Wilde’s gossip-plagued “Don’t Worry Darling.” They aren’t good.

UPDATE: Rotten Tomatoes score is 39% with 18 reviews in. This whole thing has imploded.

Variety, Rolling Stone, and the Daily Beast are among the early disappointing notices. All the reviews so far cite Florence Pugh as outstanding, Harry Styles as iffy, and the movie itself for falling apart in the third act.

This is exactly what I heard from those who attended screenings in New York and Los Angeles last week.

PS Warner Bros. has known about this a long time. They’ve got “Elvis” headed to the Oscars.

Still, “Don’t Worry Darling” will open on September 23rd to a big first weekend thanks to Styles’ fans. Whether it builds an audience will depend on their word of mouth.

Rolling Stone: Olivia Wilde’s fuck you to the patriarchy isn’t quite the flaming car wreck that the film’s P.R. tour was — but it also isn’t what you’d call “good”

The Daily Beast: The musician is like a deer in headlights throughout much of the proceedings, and a scene of him crying in the car following a particularly fiery row with Pugh is littered with more crocodile tears than Charlie Sheen being hauled out of his office by the cops at the end of Wall Street (not to mention, his bastardized British accent is a distraction).

Vanity Fair: the film caves in. The intention here is to tell a pertinent story about women’s subjugation under the modern forces of anti-feminism, which has hardened online into a real-world aggressive sociopolitical ideology fueled by pseudo-intellectual public figures, red-pilled demagogues who have snaked their way into mainstream discourse—or, really, created their own mainstream. That’s certainly a salient topic for a film, but in Don’t Worry Darling’s execution, Wilde offers no new insights. There are even some contradictory elements to the grand secret premise of the film, a muddled clash of faux-empowerment and Handmaid’s Tale debasement.