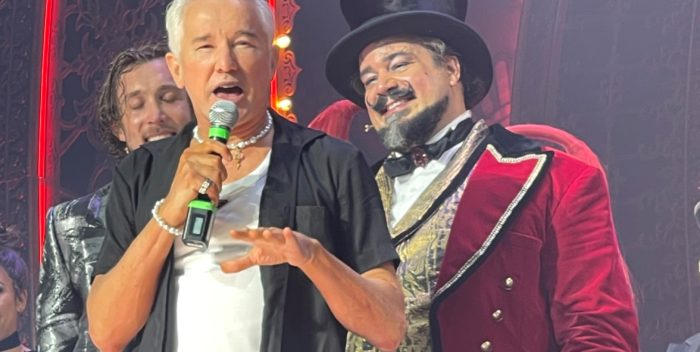 “Moulin Rouge” had its closing performance tonight after a sold out run at the Pantages Theater In Hollywood, as part of the wildly successful “Broadway in Hollywood.’ The show is based on Baz Luhrmann’s 2001 hit film of the same name.

In true eccentric Baz over the top flamboyant style, he made a surprise appearance at the end of the show.  Bounding on stage he told the packed crowed that, “sitting in the audience I was just overwhelmed.  I have not seen “Moulin Rouge” the stage production since Broadway in 2019 and it was so wonderful.”  He quipped, “I seem to me like the grandfather here because I didn’t make the show.  Grandparents usually have all fun with the kids, and don’t do any of the work, so that’s me.  I saw it in 2019, and then I went on to make a movie for three months (he’s referring to “Elvis”), and I don’t know if any of you noticed but something happened.  Covid got in the way.  It made us all think then maybe one day will we ever actually come together in a theater and see a cast as great as this and do a show as wonderful as this?  I guess we have our answer.  It really is an incredible cast. I was truly moved by a show I wrote like 25 years ago.”

Baz the switched to filmmaker mode and with his usual exuberance told the crowd, “Hey one thing, we should make a film. I’ll turn my camera on my phone on and you are all extras. Are you cool with that?”  The crowd answered with enthusiastic yes’s.  Baz then had the houselights turned on, shouted ‘action’ and proceeded to first film the audience singing ‘Can, Can’ then turned his phone and shot the cast doing the same.  Baz shouted ‘cut’ waved to the crowd and in his true signature fashion made a dramatic exit to stage right.

Baz gave the closing night crowd and the cast a real treat.  He’s right, the show is just terrific.  Conor Ryan as the lovelorn Christian is superb and should be on his way to becoming a major star, he acted and sang the part perfectly and poignantly. Kudos also to Austin Durant, Andre Ward, David Harris, Libby Lloyd and the cast as a whole.  What a truly theatrical Baz Luhrmann style way to end the run.  Next stop for this touring company is San Francisco.  Lucky them.  Next up at the Pantages is “Jagged Little Pill.” Lucky Angelenos.  As ‘Broadway In Hollywood’ says so aptly, they are truly the “The Best of Broadway in the Heart of Hollywood!”