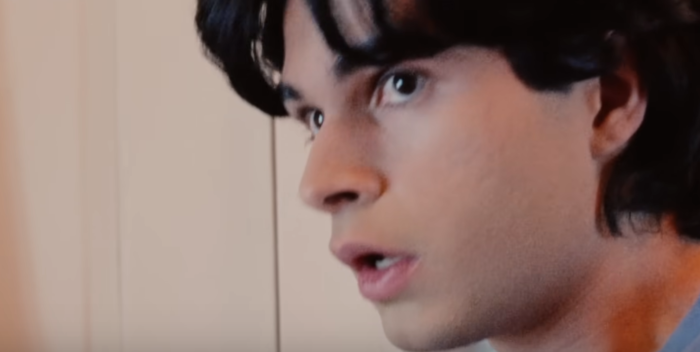 Here’s the thing. A 24 Films baited the hook for failure with Owen Kline’s “Funny Pages.” They screened it tonight via their website for 15 bucks. Tomorrow it starts playing for a few days at Lincoln Center. But it’s not a good movie.

Kline is the 30 year old son of Kevin Kline and Phoebe Cates. He knows how to make a movie, there’s no question about his talent. But this was not the one to make. “Funny Pages” is like one of those terrible indie movies that pop up on Channel 13 late on a Saturday night or on what’s left of Manhattan Cable TV. You sit there and think, How did this happen?

A big problem is that because of Owen’s celebrity connections, he got a deal with a real distributor. This is at best a school project. It looks like it cost fifty cents. The sound is terrible. The screenplay is very uneven. It’s the story of an obnoxious, self entitled kid named Robert played by Daniel Zolghadri (19, maybe) who wants to be a comic book artist. He’s rude to his parents, and not very smart about life. He has no story arc. He’s just awful. He’s not that great an artist, either.

If there’s a grossness to the underground comic world, Kline has found it. Robert leaves his cushy suburban home in Princeton, quits school, is nasty to his parents, and finds a sub basement apartment in Trenton with deviants. None of this makes sense or is charming. The screenplay’s inconsistencies appear as the parents (Josh Pais and Maria Dizzia) fade out for a bit while Robert is having his bildungsroman in Trenton.

But when Robert returns home in a panic, he’s so unpleasant you agree with the father, who’s had enough. So Kline has written that part well. Robert also drags along with him a much older failed comic book artist who seems schizophrenic at best. That’s Matt Maher, giving the performance of a lifetime against all odds. He’s brilliant and does as much as he can.

There are two cameos of note in “Funny Pages.” Ron Rifkin, a great actor, has a brief scene as Robert’s grandfather. I didn’t realize until I saw him how much I missed him on a screen. And then, I gasped: Louise Lasser, in a wheelchair, acting crazy in a pharmacy. She’s 83 years old now, our Mary Hartman. Despite the effort to make her look bad, she doesn’t. Where has she been? This is one of the most squandered careers in showbiz history. But you just want to stop the movie, pull her off the screen, and help her out of this predicament.

So “Funny Pages” is a disaster coming from A24. If it it had been with a tiny distributor, or in a festival (it played virtual Sundance, but few could access it), I don’t know. Look, a lot of older people have made terrible movies and gone on to great things. (Think Larry David’s “Sour Grapes” or movies by Matt Weiner, Jason Alexander, and Alan Ball.) So we’ll close this comic book and move on to other things.