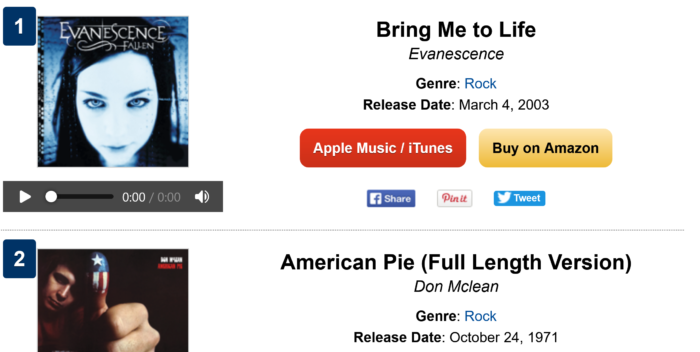 The number one song is “Bring Me to Life” by Evanescence. It was released March 4, 2003.

The number two song is “American Pie,” the full 8 minute version by Don McLean, released at the end of 1971.

Number five is “Have You Ever Seen the Rain?” by Credence Clearwater Revival, released in 1971. Number 10 is Sia’s “Unstoppable,” which is six years old.

Meanwhile, current acts like Beyonce and Harry Styles have been unable to launch second hits from their albums. While Styles’ album, “Harry’s House,” is still selling, Beyonce’s “Renaissance” has reached a period.

Demi Lovato’s album and single are out there, but not blockbusters by any means. The single, “29,” is at number 51.

What is going on here? Old records are ruling the roost at the end of the summer, a summer which was swamped by Kate Bush’s 1985 hit “Running Up that Hill.”

The iTunes singles chart should be full of new music. For example, Ryan Adams’ “When She Smiles” should be right up there. So should Jon Batiste’s “Sweet” with Diane Warren and Pentatonix. Instead, 20 of the records from number 50 to 100 are all oldies. Isn’t that a little frightening?

The music business is so different nowadays, Very few new artists are being broken, radio is so compartmentalized that few new songs are played, there’s little diversity or thinking outside the box. And it’s not just unknown artists. Ask Billie Eilish. She released two singles a month ago and they died on impact.