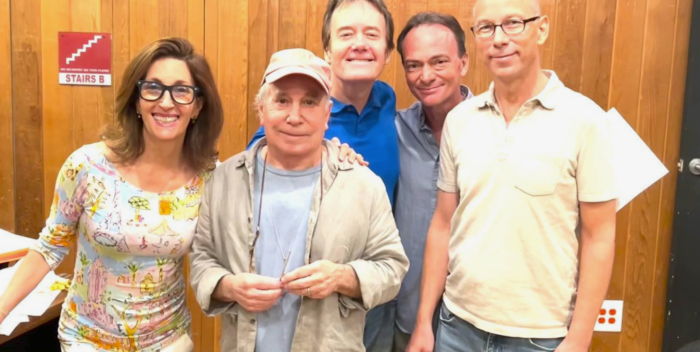 Good news: even though he’s stopped touring, Paul Simon is still writing and making new records. According to a Facebook post from cabaret singer Barbara Fasano, Simon is recording right now, But even better: discovering that Fasano and her group were recording an old Simon song, “Old Friends.” in the next studio, he came in and the rest is history.

The smart and lucky Fasano writes:

“Here’s how it happened: Eric, Sean, Vito, & I are at Reservoir Studios this week making our new CD. & yes, that’s Paul Simon, who is making HIS new record in Studio B. We had laid down 4 tracks & were about to record OLD FRIENDS. So how could I resist? Around 4:00, there was Mr. Simon having lunch in the communal kitchen, & I introduced myself & said I was sorry to interrupt, but we were actually about to record his song. His face lit up & he was on his feet, walking into our studio. Everyone got introduced & Paul Simon pulled out his guitar & coached us on voicings & instrumentation. In a crazy surreal moment, he began to play OLD FRIENDS on the same guitar he’s been playing on his solo records for 50 years, while I sang along. He stayed with us for nearly an hour. And then we laid down OLD FRIENDS, now sprinkled with pixie dust by this American icon.”