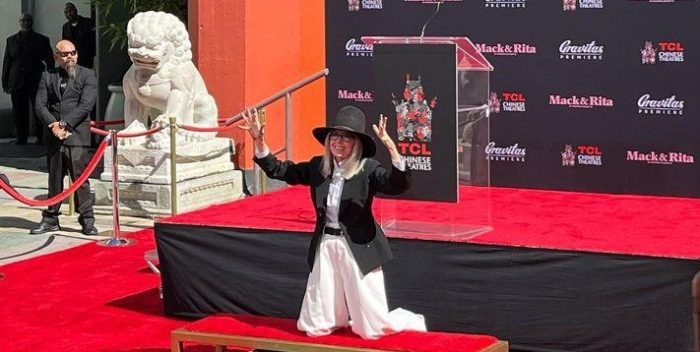 Cinematic icon and long time animal activist Diane Keaton got her hands and feet cemented in the forecourt of the famed TCL Chinese Theater Thursday morning.  The 1978 Oscar winner for Best Actress in Woody Allen’s “Annie Hall.” Keaton currently is seen in the film “Mack & Rita” and is reuniting with her “Book Club” pals Jane Fonda, Candice Bergen and Mary Steenburgen for “Book Club 2-The Next Chapter” which will be open Mother’s Day Weekend in May, 2023.

Keaton, accompanied by her children — son Duke, 22, and daughter, Dexter, 27– was effervescent even in the blazing hot sun. And, of course, Diane was still ever the fashionista in black and white with a black hat, carefully taking off her shoes which she quipped were “too expensive to get dirty” showing her way cool polka dot black and beige socks.  Diane joked about the oppressive heat, but then true to form, she gamely dunked her feet in the famed, famous cement.

Keaton is a long time animal activist. She’s on the board of the Social Compassion In Legislation, aka SCIL, which promotes legislation to protect animals. She’s needed now more than ever following the collapse and beating in NYC this week of carriage horse Ryder. Ryder collapsed from the oppressive heat, was beaten by his driver, all the while being filmed and yelled at by passersby.

The video of the incident has gone viral, sparking outrage.  Animal advocates have long called for the horses, whom they rightly say have been suffering for years, be replaced with electronic vehicles.  Mayor Eric Adams has said he does not support a carriage ban.  Former Mayor Bill de Blasio had said he would ban it but never came through on his promise. The video is trending and Kendall Jenner, with her 253 million followers on Instagram, just ramped up the furor with her post.

Jenner is not the first celebrity to point out the issues of horse carriages in New York. Many years ago, Alec Baldwin and Kim Basinger protested the continued use of horses dragging tourists around in extreme heat and cold. For a long time this column was ambivalent about the horses as long as they were well cared for. But time has passed, and this incident with Ryder is the breaking point. It’s time to retire the Central Park horses, put them out to pasture, and stop abusing them as playthings for tourists. There is no actual New Yorker who takes those infernal carriage rides anyway. It’s time to put this to an end.