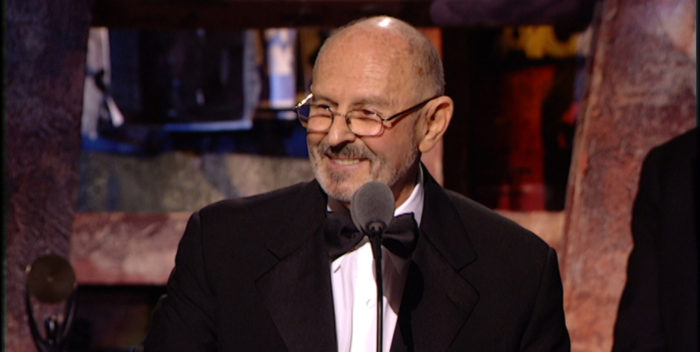 Mo Ostin is one of those people who are on the Mount Rushmore of Rock and Roll along with Ahmet Ertegun, Clive Davis, Seymour Stein. He died today at age 95 with an enormous legacy.

Ostin basically invented what was Warner Bros. Records, eventually turning that into Warner-Elektra-Atlantic or WEA as it became known, the home to hundreds of successful recording artists and many great labels.

In the late 60s, all through the 70s and into the 90s, Warner Bros. Records was a towering giant. More than half of anyone’s record collection would be full of Warner labels on albums by Bonnie Raitt, James Taylor, the Doobie Brothers, George Benson, Prince not to mention Mo’s early signing, Jimi Hendrix, plus Neil Young and Frank Sinatra whose Reprise Records he founded eventually merged with Warners in 1967. He would serve two years running Warner/Reprise and then become head of the vast WEA until 1994.

Ostin also brought in under the umbrella Elektra Records, gaining acts like Carly Simon, Bread, the Doors, and so on. In 1967, Atlantic Records was purchased by Warner’s owner, Steve Ross, and a dynasty was born.

Under Mo there were also a slew of great producers like Lenny Waronker, Russ Titelman, Ted Templeman, and Tommy Lipuma, among others.

When WEA was sold to Edgar Bronfman Jr. — who killed it — Ostin decamped to start Dreamworks SKG Records under Spielberg, Katzenberg, and Geffen. He was considered a king in the music business, beloved (and probably feared in some quarters). But during those halcyon Warners days, it’s hard to imagine another greater entity.

Did I mention that Ostin also brought in Seymour Stein’s Sire Records, which gave birth to Madonna, the Ramones, Talking Heads, Pretenders, and so on?

Mo Ostin was a gentleman and a scholar of music. He will be forever missed. Condolences to his family.

“Mo Ostin was one of a kind. The company he chaired was truly unique in its very special management of artists and the extraordinary depth and range of talent on its roster. Mo’s artists deeply impacted contemporary music and culture profoundly and historically. Yes, he and I competed with each other for many years but my friendship with him was very deep and extended to our respective families. I will always cherish our very close relationship.”