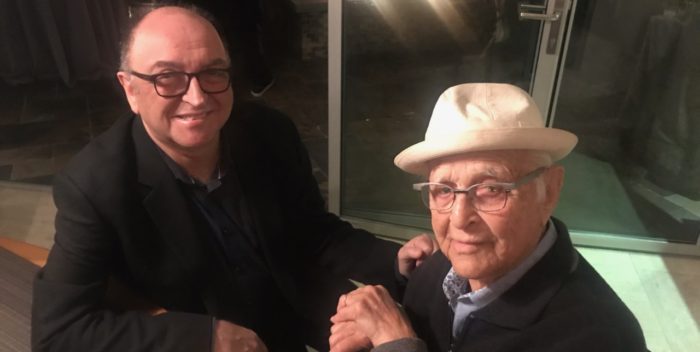 Norman Lear turns 100 today. He’s got all his marbles and then some. Happy birthday, Norman. To celebrate, his daughter, Kate, has recorded a birthday message from Norman and posted to Instagram. It’s below.

Few in the history of the arts in this country have matched Norman Lear’s accomplishments. I mean not just the TV shows like “All in the Family,” “Maude,” “Good Times.” “The Jeffersons.” But also his commitment to political liberalism, the creation of People for the American Way, his unending interest in making the world a better place.

Seven or eight years ago, I left a lunch at the 21 Club with producer Fred Zollo and we ran across Sixth Avenue to the theater district. Fred peeled off, and I was left standing in front of the Shubert Theater, out of breath, heading to a matinee. And who was standing there, unaccompanied, waiting for his wife? Norman Lear, Maybe he was 93. I was taken aback. “Norman?” I said. We shook hands. I was so impressed that there he was, no one noticed that one of the most important people in the history of entertainment was just idling in Shubert Alley. At 93. And now he’s 100 and seems no different.

In 2019, Norman turned up at a cocktail party for songwriter Diane Warren at Ross House at the top of Mount Olympus in Los Angeles. It was great to see him. I am honored that he allowed Leah Sydney to take a picture of us together, it’s one of the best mementos I have from this experience. I post it here again.

We are all in awe of Norman Lear and bow down to him on this momentous occasion.