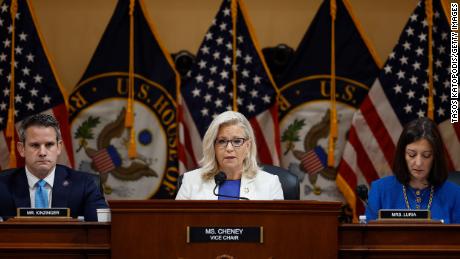 Last night’s January 6th hearings did just fine ratings-wise. Around 17 million people watched on the three broadcast networks and CNN and MSNBC. Fox News showed reruns of Felix the Cat and Fox TV aired the Yule log. PBS– which I watched and had excellent coverage with Judy Woodruff, as usual– wasn’t counted.

Seriously, Fox can’t air the proceedings anywhere because all the testimony contradicts the shite they serve their viewers on a regular basis. God forbid a Fox News viewer was told truth: that Donald Trump didn’t care if his vice president, Mike Pence, was harmed on January 6th. Or anyone else including California Republican congressman Kevin McCarthy.

Trump should be in prison now. Most of his family should be too. The two brave souls who testified last night–Sarah Matthews and Matthew Pottinger — demonstrated intelligence and forbearing. They are Americans first, Republicans second. They were each very impressive.

So were the Congresspeople who interviewed them, Adam Kinzinger and Elaine Luria. Kinzinger is a Republican, he’s absolutely terrific and will definitely run for President one day. Each of these people deserves a Medal of Honor, as does Liz Cheney and everyone who runs that committee. Each session is so beautifully assembled and executed, it’s a well oiled machine.

Of course the highlights of the evening were previously unseen highlights of Trump refusing to say the election was over, and unable to speak simple words off a Teleprompter. He couldn’t say “Yesterday.” And then there was Josh Hawley, a professional tool and assh*le, running like a ninny to get out of the Capitol. What a POS.