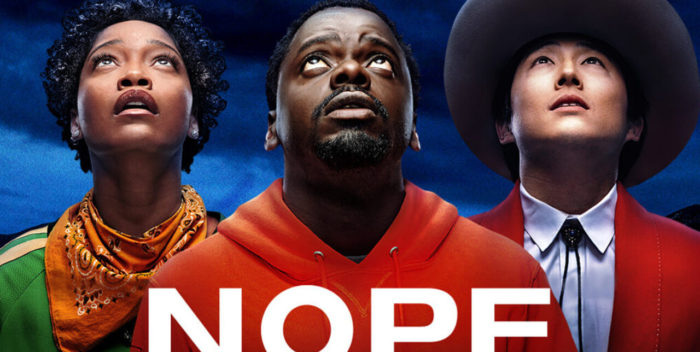 I know that the Film Twitter is desperate for Jordan Peele’s “Nope” to be dope. They loved “Get Out” and even “Us,” his sophomore effort that didn’t compare to the debut.

My favorite reaction from last night’s press screening may say it all. One young guy was over heard saying to another, enthusiastically: “I’ve never seen anything like that before!” Indeed.

“Nope” — an ambitious riff on summer blockbusters — stars Oscar winner Daniel Kaluuya — who had his breakout with “Get Out” — and Keke Palmer, who’s this year’s “It” girl. Plus there’s an extended appearance from Steven Yeun of “Minari” and a short cameo from the great Donna Mills of “Knots Landing” fame.

There are also a lot of animals, UFOs, aliens, and a necessary amount of fake blood. Peele aims high and sometimes hits his target. But other times “Nope” feels a little like a Quentin Tarantino movie that was never made until now.

The set up is that Kaluuya and Palmer are brother and sister OJ and Emerald who run a horse training business for Hollywood studios and live on a ranch in a remote area outside of Los Angeles. (Is there such a thing?) They sense UFOs are lurking in the clouds, and set out to film them. (As an after thought. they might also save the world.) Into this project they bring a sort of Geek Squad expert from the local Fry’s Electronics store (are they still in business? good product placement), and a Sam Peckinpah-like filmmaker who might be the Sean Penn character from “Licorice Pizza.”

Meantime, locally there’s an Old West carnival in town run by Yeun’s Jupe that might be from “Nightmare Alley.” And he has a connection to the movie’s opening scene– a TV show taping years before in Hollywood destroyed by Gordy, a showbiz chimp who loses his mind and kills everyone except young Jupe. (No one comes running to their rescue– this may be a reference to Blake Edward’s excellent Hollywood satire, “SOB.”)

Do the UFO’s have something to do with Gordy going crazy? Do they have some connection to the wild horses on the siblings’ ranch? Is there a reason Kaluuya’s character is named “OJ,” other than to hear Palmer shout out, “Run OJ, run!”? I have no idea.

For a while, Peele seems like he’s got something interesting going. A Black brother and sister starring in a western with a UFO theme feels Tarantino-esque, with a touch of “Blazing Saddles” meets “Close Encounters.” But Peele has enough of his own imprint with the horror elements: the sound, cinematography, and production are impeccable and distinct.

What about the cast? The clever, hip Palmer does the heavy lifting here. She’s in every scene, and her presence is key to the action. Emerald is a gem, a unique, snarky, and smart heroine for a horror film. If anyone’s going to survive an alien attack, it’s her.

Kaluuya is more of an enigma in “Nope.” He plays OJ as if he’s in a trance. OJ is the most inactive hero a movie could have. He does ride a horse like a cowboy. And I loved his scenes with the too-little used Keith David, who plays the siblings’ father. Peele seems more interested, frankly, in Michael Wincott’s caricature as the rowdy cinematographer trying to capture the aliens, and Brandon Perea as Angel, the Fry’s guy who knows how to set up electronics equipment. (The director likens OJ, Emerald, and Angel to Harry Belafonte, Sidney Poitier and Ruby Dee from “Buck and the Preacher.” The poster for the Black western is prominent in the background– very Tarantino.)

Where Peele goes wrong, and “Nope” goes out of control, is when the lurking space ship, which turns out to be something other, becomes a wild alien determined to swoop down and suck up everyone on the ground. What could have been a witty, psychological exercise then jumps the shark, so to speak, and becomes a parody of 50s D movies. In “Nope,” that’s the frustration. A director who’s a social observer has become a ghostbuster, for better or worse.