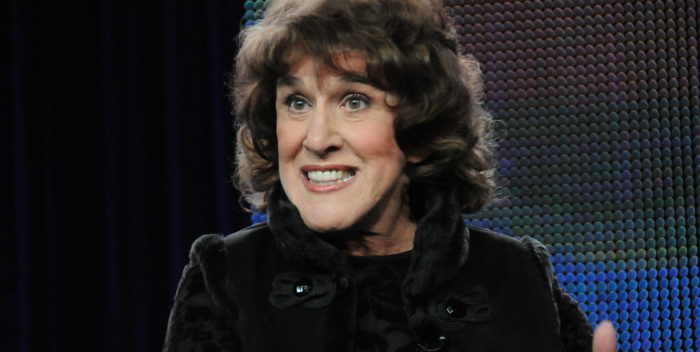 The husband of “Laugh In” star Ruth Buzzi is asking for prayers for his beloved wife. LA entertainment reporter George Pennacchio says Kent Perkins reports Buzzi has had a series of strokes.

Buzzi’s Twitter account is usually brimming with funny one liners. But yesterday there was an ominous post that read: “Thank you for your love and friendship for all these years.”

Buzzi, 86, is probably unknown to readers under a certain age. But in the late 60s she was a superstar on NBC’s irreverent sketch comedy show, “Rowan and Martin’s Laugh In,” the blueprint for “Saturday Night Live.” She was part of a cast that included other newcomers like Goldie Hawn, Lily Tomlin, Judy Carne, JoAnn Worley, and so on.

Ruth and Henry Gibson appeared in dozens of sketches as a lascivious old man and an outraged spinster named Gladys Ormphby. He’d say something dirty and she’d hit him with her large pocketbook. I’ve got some videos below. She was nominated for 3 Prime Time Emmy Awards, two Daytime Emmys, and won a Golden Globe for not only playing Gladys but a wide variety of characters.

Buzzi always worked after “Laugh In” went off the air, but she will always be remembered for hilarious work on that landmark series. Sending prayers and good thoughts to her family.

Longtime comedy star Ruth Buzzi has had a series of strokes. Her husband, Kent Perkins, is asking for your thoughts and your prayers for his wife of 43 years. 🙏
Ruth is less than a week away from her 86th birthday.
(📷 courtesy Kent Perkins) pic.twitter.com/kJWwlGGyDM