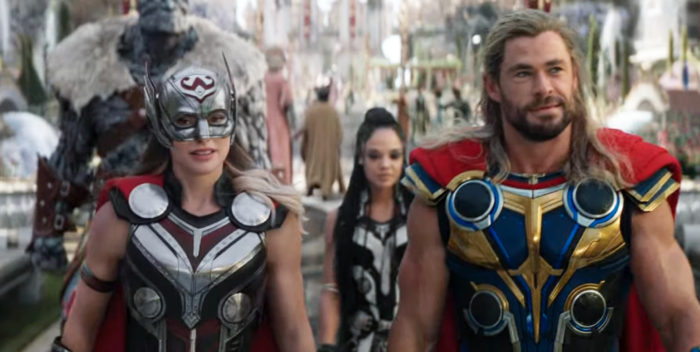 In 2017, critics fell in love with “Thor: Ragnarok.” The third “Thor” movie from Marvel got a 93% on Rotten Tomatoes and went on to become a blockbuster.

The reviewers are largely unimpressed. They’re saying it’s a redo of the last movie, and kind of a hot mess. But will it matter? Probably not. Disney publicity has been in hyper drive for weeks. They’ve planted stories of so many different kinds in so many places, you can’t escape “revelations” from Chris Hemsworth or Natalie Portman on every subject.

There’s an overall feeling that Thor, the former Norse God, has become a witless bumbling fool. Waititi has turned him into a wise cracking Deadpool. And where is Loki?

The Rolling Stone review: “A collision of competing tones, subplots, conceptual big swings and chaos masquerading as pathos, this new addition to the Asgardian-gods-and-monsters corner of Marvel Cinematic Universe is a holy mess.”

Check back tomorrow. My guess is fans will flock to it, anyway. It’s rare that a Marvel Universe film isn’t embraced enthusiastically and seen over and over on opening weekend.