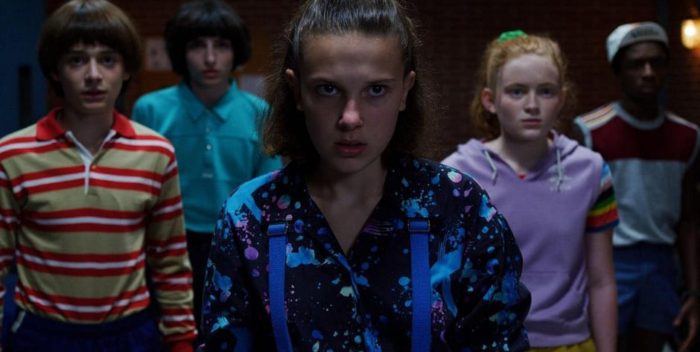 To tell you the truth, I was happy when Season 3 of “Stranger Things” ended. The story was wrapped up, we’d seen everything we needed to, and that was it.

But it’s never the end. So Season 4 is something like 14 hours, I’ve watched it. It’s gargantuan and unnecessary. The kids are now a lot older, so it’s not “Goonies ” revisited anymore. It’s almost “The Big Chill.” Someone on Twitter quipped that a lot of the kids look like they’re on their second marriages. It still cracks me up.

The best things about Season 4 are Sadie Sink as Max, the red haired heroine who listens to Kate Bush all the time; and Matthew Modine as Dr. Brenner, the mad scientist who created all this chaos for Hawkins, Indiana. Also in the forefront of the action is Natalia Dyer as Nancy Wheeler, the good girl torn between two guys and trying to save the world.

Who got the short stick this time? The adults. I mean, the older adults since the actors who play Nancy, Steve, Jonathan, Eddie, and Vecna/One are all between 25 and 30. Winona Ryder, David Harbour, and Brent Gelman are all sent to Russia for some reason, to be in the snow, a prison, and to fight green screen monsters. Instead of being integral to the main story, they are like a side dish. It’s too bad because they are the best actors on the show. Gelman is a hoot this time around as Murray.

But remember when Winona (Joyce) figured out the mysteries in the first season? She was so charming an unexpected, and the kids needed her. By the end of Season 4, Joyce (and Harbour’s Hopper and Gelman’s Murray) are ready to be sent to the nursing home.

Still there are lots of pleasures with “Stranger Things.” The special effects, costumes, lighting, sets are beyond compare. There are lots of “Easter eggs,” references to other movies and shows, to “Stranger Things” itself. I loved the Eddie Munson character who looked more like Eddie van Valen than the original. And the pizza delivery guy, Eduardo Franco, needs his own Seth Rogen movie. He’s the new Franco in the Rogen world (I don’t think he’s related to the other guy).

Was 14 hours worth it? OMG. I did it. That’s all I know. Not all at once, a couple at a time until the end, which was two hours and 22 minutes! Some things I didn’t understand. The kids go to a gun store called The War Zone and spend a fortune. How did they pay for it? How did they pay for anything? No one eats, bathes, or seems aware of anything in real life. I guess we just suspend disbelief. There are weird jumps where we’re supposed to assume things happened, and that’s okay, The real stars of “Stranger Things” are the film editors. I salute them.

As for Sink and Modine, they deserve Emmy nominations, I hope it works out. So does Millie Bobby Brown as Eleven. She’s still a teen, I have no idea how she carries this load. And the good news she will have a career well beyond the series. If it ever ends.