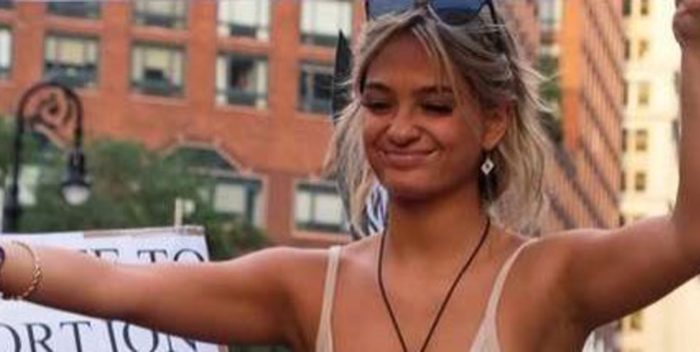 Claudia Conway is a chip off the old block. Her father’s.

Claudia, now 17, is the daughter of ruthless liar, Trump supporter still, and danger to the republic Kellyanne Conway.

Over the weekend, Claudia led a pro-choice rally in Englewood, New Jersey and declared on Twitter that she wouldn’t be celebrating July 4th because of the Supreme Court rollback of Roe v. Wade.

Meanwhile, her mother’s book, “Let’s Return to the Dark Ages,” aka “Here’s the Deal,” dropped off Amazon’s top 1000 after a month in release. It’s one of the quickest disasters in book publishing history.

Claudia– who became famous on social media while her mom was busy fronting like a stooge for Trump in the White House press room– later appeared on “American Idol.” She had teenage ups and downs emotionally. But she clearly wants to stay in the spotlight even if it means going against everything Kellyanne and her former employer (maybe still, who knows) stand for.

Claudia — see below — proves to be an articulate communicator. Unfortunately, a stupid reporter for a local paper called her “potty-mouthed.” It couldn’t be less true. Claudia has turned a corner. I think we’re going to be hearing from her for a long time. Her father, George Conway, estranged from Kellyanne, and politically with Claudia, must be proud.

Will NOT be celebrating July 4th today🥰🥰 pic.twitter.com/o1TwAt6fpK