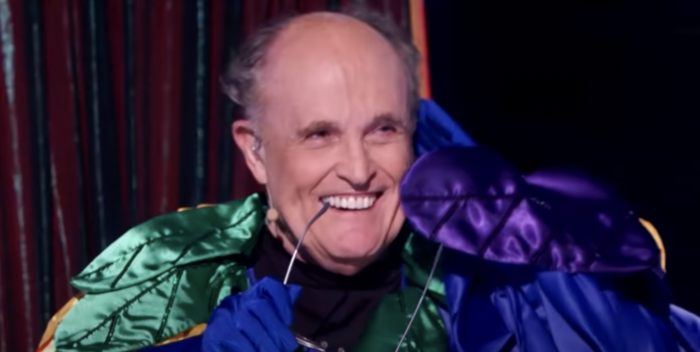 Rudy Giuliani flipped out this week after a supermarket worker patted him on the back and called him a “scumbag.” Giuliani made a Federal case of the whole thing, claiming if he weren’t so spy there might have been bodily damage.

What made Rudy so skittish about a little tap?

Well, I’m told by sources close to the Fox show “The Masked Singer,” that Rudy had reason to be concerned. He has a habit of “losing it.”

Last winter, Donald Trump’s henchman appeared on Fox TV’s “The Masked Singer” and caused a lot of hubbub. (The show aired in April.) Not only was the audience outraged, but so was judge Ken Jeong, who walked off the set when Rudy was revealed as the singer of “Bad to the Bone” underneath his costume.

Maybe Ken had reason to put up a stink. Apparently Rudy had already made a stink — literally. My sources say that Giuliani’s costume — a gigantic, heavy bird that popped up from a Jack in the Box — proved too much for him. “He peed himself in the costume,” says an insider.

I’m told the look on Rudy’s face when the huge bird mask was taken off was relief because he’d already relieved himself. “He was very difficult to work with and seemed out of it most of the time,” says a source.

To be fair, Rudy did have prostate cancer 22 years ago. So maybe that pat on the back really worried Giuliani with good reason. Being out in public is full of surprises. For example: the night after he announced his diagnosis, I discovered him on an extra-marital date with his now divorced third wife.

PS Outside of New York you may not know this, but Rudy’s son, Andrew, was walloped this week in the Republican primary for Governor.