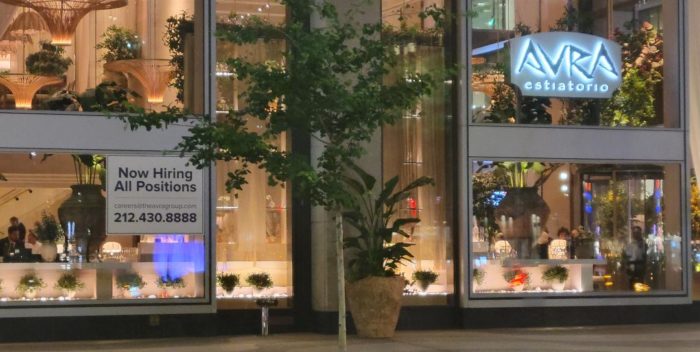 I’ve lived a long time but I’ve never seen anything like this.

In the windows of New York’s hottest new restaurant, Avra in Rockefeller Center, there are massively big Help Wanted signs in the windows.

This is the place that had a big gala opening a couple of weeks ago. Even Mayor Swagger, Eric Adams, stopped by for free hors d’ouevres.

It’s a sign of the economy that a glamorous eatery in the heart of midtown is desperate for help. Usually you’d see such a sign in McDonald’s or at Haagen Dazs.

When I called, the young woman who answered the phone said it was true, Avra is looking for people in all capacities.

With inflation at a 40 year high, gas prices out the window, groceries costing at least 25% more, you’d think Avra would be using waiting lists to hire new employees. Something has clearly gone wrong in this economy.

And PS you can’t work “remote” for a restaurant. You have to get up, get dressed, and go on in there.