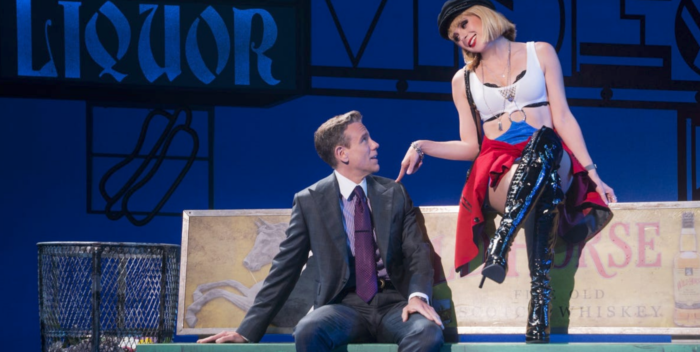 Hey, betcha you didn’t know that Frankie Valli has a mega talented granddaughter?  He most certainly does, her name is Olivia Valli and she plays the Julia Roberts role in “Pretty Woman: The Musical” based on the beloved romantic, albeit a bit twisted, film of the same name which was directed by the late and most certainly beloved Garry Marshall.

The show is on a national tour, and it just opened as part of the “Broadway in Hollywood” season at the Dolby Theater in Hollywood.  None other than the iconic Four Seasons’  88 year old lead singer was in the audience to see his powerhouse granddaughter belt out the role of the wise cracking and warm-hearted Vivian Ward (made famous by Roberts.)  Broadway Veteran Adam Pascal plays Edward Lewis, the smooth talking trick with a mushy heart (played in the film by Richard Gere. ) The peppy rock and roll score is by Grammy award winner Bryan Adams and Jim Vallance.

I caught up with Frankie after the show and he told me, “I had to hold back tears, I’m so proud of her.”  Brought to the stage by lead producer Paula Wagner, who spoke before the show and who told me that “the show is so popular here in the US and literally around the world.  We had a world tour planned, then Covid hit, but now we are playing everywhere, from the UK to Germany, to all over Europe.”

Director/ Choreographer Jerry Mitchell noted to the packed crowd that, “ I saw this film over 30 years ago, I was still dancing on Broadway myself. I knew  then and there that this would make a great musical.  Here we are all these years later.  You’ll fall in love with this show like the world did with the movie!” Another treat was Roy Orbison Jr was in the house, his dad’s smash hit (written with Bill Dee) “Oh Pretty Woman” is of course featured cheekily throughout the show. So as the “Pretty Woman” tag lines reads, “Are you ready to fall in love again?”