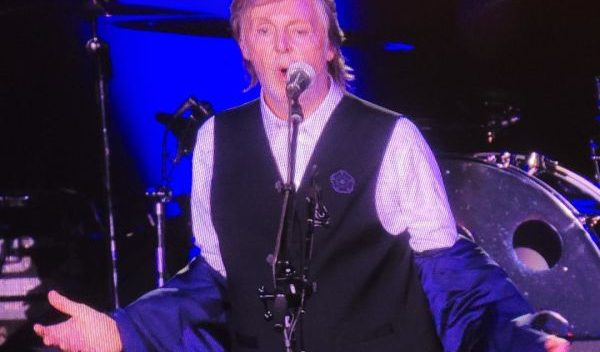 On Thursday I was lucky to be at Paul McCartney’s tour closing concert in the Meadowlands. He turns 80 today so we were looking for signs of age, of the end coming.

But there was no such sign. Flanking the stage were two enormous video screens, so nothing could be hidden. Plus, the sound mix was unforgiving. If Paul had anything he didn’t want seen or heard, it was impossible.

Paul McCartney, the “cute” Beatle, has reached 80 with grace, wit, and style. Losing the love of his life, Linda, and two of his mates, John and George, hasn’t stopped him. It’s made him wiser, I think. At one point on stage, Paul was coming down a step and tripped. He caught himself as the audience gasped. But it was a nano millisecond. Not only did he recover, but he turned to the camera, mocked the fall, and a little dance. Paul, you see, is a survivor.

He’s also a musical genius. He played 40 songs on Thursday night, it took over three hours. He used a Teleprompter, but rarely looked at it. Most of the song lyrics he knows by heart. He knows all the music, that’s for sure, and plays it with deep textures and soul. I was watching his guitar work, it’s insanely good. While he has a keyboard player helping him, McCartney still carries the weight as lead pianist. And while sometimes his vocals go off key, his voice actually opened up and improved over the three hours to the point where it was as full and sweet as it was 20, 30, 40, and 50 years ago.

And listen to these songs. We’re so used to some of them, but if you really listen to “Hey Jude” and think, how the heck did he come up with that chorus, and the ‘na-na-na’ part, which by the way has a unique way of sounding joyous and melancholy at the same time. And then there was first ever song, “In Spite of the Danger,” written as a teenager. “Danger” has such a catchy lick that he get the audience to sing it. And he talks about the terror of singing lead on the recording of “Love Me Do,” also recorded as a teen. “I still hear it in my voice when the record comes on,” Paul said.

Well, Happy Birthday, Paul. Here’s to a life very well lived. And please, come back to smaller theaters next time around, like Madison Square Garden, so we can really appreciate your art.