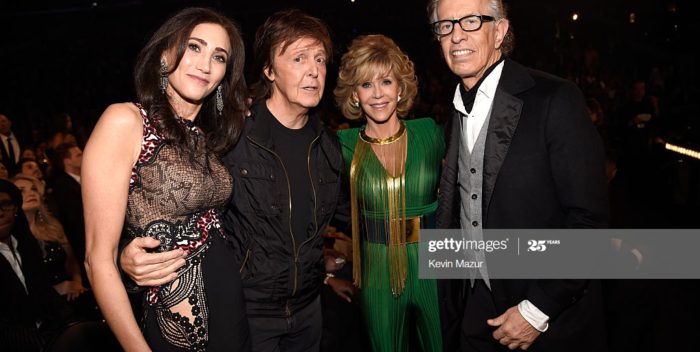 The most successful record producer of the 70s and 80s, with plenty of hits since then, Perry turns 80 today. Yes, he was born on the same day as Paul McCartney.

Back in ’73, it was Richard who convinced Paul and Linda McCartney to sing background on Carly Simon’s “Night Owl.” Then he got Paul to write a song for Ringo Starr’s “Ringo!” album, and sing background on that track too. You can’t imagine the seismic reaction to the “Ringo!” album because it reunited all the Beatles for the first time since their heartbreaking split in 1970.

A few years ago, Richard was selected for the Grammy Lifetime Achievement Award, aka the Special Merit Award, for his work producing perfect, classic, stunning records like Carly’s “You’re So Vain,” Nilsson’s “Without You,” and Leo Sayer’s “You Make Me Feel Like Dancing.”

Last year Richard fell ill — not from COVID but a form of pneumonia — and was hospitalized for several weeks. His long time girlfriend, Jane Fonda, had a brilliant idea. She brought the Pointer Sisters to his hospital room, and they sang for him. They actually sang “Slow Hand,” one of their many hits Perry produced. It must have done the trick because he made a full recovery!

Back in 2000, I ran into Richard at Nick and Toni’s restaurant in East Hampton. After dinner we all went back to the house where he was staying. He played us a cassette tape of big band songs he’d made with Rod Stewart. Everyone was dancing around the room. He hadn’t made a deal yet for the record, but soon enough Clive Davis signed it up. The result was five albums of Rod Stewart singing the Classic American Songbook. They sold millions and millions of copies and won tons of awards.

Today all of Richard’s pals like Robbie Robertson from the Band so on will gather in LA to salute eight sensational decades. I wish I could be there! Happy Birthday, Richard! Nobody does it better! (He produced that one, too.)

PS Did I mention that back in the day, Perry dated Cher, Diana Ross, and Tina Turner? Oh yes.