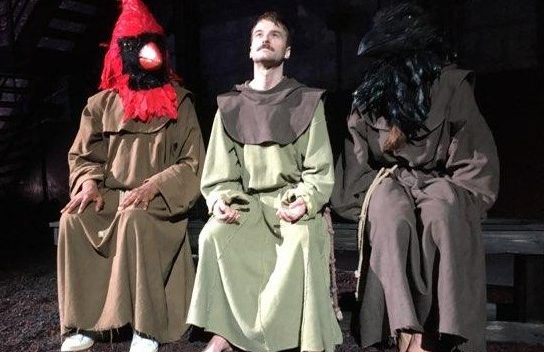 Martha Clarke‘s stunning theater piece, “God’s Fool,” opens at the famed La Mama theater in the East Village this week. But the play with music wouldn’t have happened without special financing. From a monk.

Ironically, “God’s Fool” is a unique take on St. Francis of Assisi, who was, as it happened, a monk himself. But he didn’t win Powerball lottery. That’s what happened in 2014 to Roy Cockrum. He won $259 million and knew just what to do with it.

After taking a lump sum of $153 million ($115 million after taxes), the Knoxville, Tennessee monk left his order and decided to start funding regional theater around the country. Cockrum had tried being an actor in New York when he was young. But after many frustrations he thew in the towel and put on the cowl, so to speak.

A random visit to a supermarket changed his life. And changed the lives of countless theater groups including ones like Berkeley Rep in California and the Goodman Theater in Chicago. He’s already given away millions of dollars.

Martha Clarke is already a legend in New York for her avant garde stagings. I actually saw an early piece, based on Kafka’s “Metamorphosis,” in 1982. It starred Linda Hunt, who went on to win an Oscar for “The Year of Living Dangerously” and is now known to zillions as Heddy on “NCIS Los Angeles.” I can still see it in my mind, it was so memorable. Now forty years later, “God’s Fool” — following four decades of successes — resonates the same way.

But in this tricky pandemic time, Clarke needed a backer for “God’s Fool.” And that’s where Roy Cockrum’s Foundation came in.

Francis wasn’t exactly a monk from birth. He was quite the ladies’ man. But he eventually turned into one of the important religious figures in history. You could say he started the first Friars’ Club, but the punchline now is that Clarke — who counts among her accolades a MacArthur fellowship, a Drama Desk Award, and two Obie Awards — has gorgeously captured a snapshot of him as Francis gathers his followers.

She’s done it with an A team of collaborators: a phenomenal scenic design and show stopping, endearingly comic masks that would put Julie Taymor to shame by famed artist Robert Israel; costumes from “Mrs. Maisel” genius Donna Zakowska, soaring chorale music direction and arrangements from Arthur Solari, and a singing text from Fanny Howe, among others.

Clarke’s other collaborators are the very talented cast of stars including Patrick Andrews, Evan Copeland, Luca Fontaine, Ingrid Kapteyn, John Kelly, Rico LeBron, George de la Peña (you know him from “Star Trek” and the “Nijinksy” movie, and James A. Pierce III, whose gospel blues voice has graced Broadway in “The Lion King” and “Anastasia.”. You’ve got to see this ensemble and hear them because for 80 minutes they create a gem of a theater piece that can’t be missed.

As for Brother Roy, he told the Financial Times that when he won the Lottery,  “I literally fell to my knees — a tsunami of cash like that is quite overwhelming.” But he knew just what do with it. Now he’s pumping much needed funds into regional theater all over the country. But New York is also regional, and La Mama — started by the legend Ellen Stewart decades ago — is the perfect recipient.